The goal of completing construction of 450 miles of border security protection by the end of 2020 was met, reports the Customs and Border Protection (CBP) agency. The addition of new or improved fencing along the border, has been instrumental in slowing the flow of illegal migrants and contraband across the southern border.

President Biden has stated repeatedly that he intends to halt further construction of secure fencing, although he has stopped short of saying that he will remove existing barriers. However, Biden’s efforts to stop all construction of the border wall are hampered by existing contracts for hundreds of more miles of fencing. Before leaving his position, Acting CBP Commissioner Mark Morgan announced that his agency had finalized contracts for new construction and the acquisition of privately held land along the border. 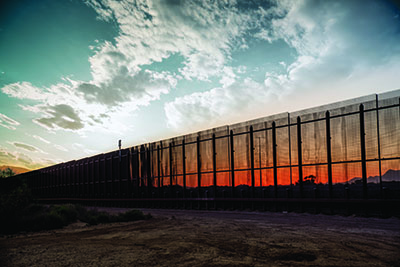 Morgan asserted that canceling existing contracts could be problematic for the new administration. “They could terminate those contracts if they want to, but that’s going to be a very lengthy, messy process. We’re going to have to go into settlement agreements with each individual contractor,” he said. Morgan noted that in some cases work has already begun and the government will be obligated to pay the contractors for that work, regardless of whether the job is completed. Additionally, materials have already been produced for new construction. Fulfilling President Biden’s pledge to completely halt border wall construction could cost the government (i.e. taxpayers) billions of dollars, with nothing to show for the expenditures.

The enormous costs associated with terminating existing contracts could also provide the new administration the cover it needs to walk-back campaign pledges the president made to energize his party’s far left base. Even before assuming office, Biden publicly worried about the consequences of a new border surge that could be triggered by the belief that his administration will do nothing to prevent people from entering. With migrant caravans forming in Central America in anticipation of his inauguration, Biden voiced concern. “The last thing we need is to say we’re going to stop immediately the, you know, the access to asylum the way it’s being run now and end up with 2 million people on our border,” he said in December.

Regardless of how fully (and at what cost) the Biden administration carries through on its pledge to end border wall construction, the completion of 450 miles of security barriers and the addition fencing that is already in the works represent a significant victory for the American people. It also brings to fruition a plan that was first laid out by FAIR more than 30 years ago with its publication of Ten Steps to Securing America’s Borders. In that publication, FAIR introduced the idea of a border security barrier, including a scale model of the needed infrastructure. Many of the ideas contained in that 1989 publication have been incorporated into enhanced border security infrastructure now in place, especially the hundreds of miles of border areas that are now protected by new fencing.