The United States has become a metropolitan nation in the sense that most of the nation's population today is living in a metropolitan statistical area (MSA). Those areas are concentrated populations surrounding and integrated with one or more major cities. The attraction of these MSAs appears to be even greater for immigrants than for the native-born population, because there is a greater concentration of foreign-born residents in these metro areas than in the rest of the country.

With today's unacceptably high rate of national unemployment — 7.6 percent in July 2013 — there is an understandably acute focus on policies that may help or hinder the prospect for restoring job opportunities for the unemployed.

Census Bureau data indicate that as of 2010 more than four-fifths of U.S. residents (83.3) lived in a metropolitan area.1 An even larger share — more than nine of every ten (94.4%) of the nation's foreign-born also lived in one of the 389 MSAs. This is vastly different from immigration during the settlement of the country when immigrants still headed into the hinterland to stake out a new homestead or even the "great wave" era of mass immigration at the turn of the last century. In 1870, 26.4 percent of the immigrant population resided in cities of over 100,000 residents. By 1900, that share was 38.8 percent. By 1990 the share of the foreign-born population living in "urbanized areas" was 88.3 percent.2 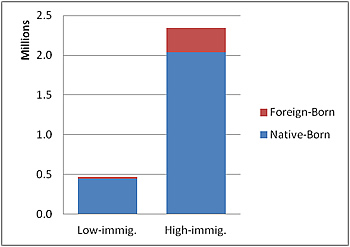 The advocates for increased immigration argue that a growing population will grow the economy and result in job growth. The White House released a report in August 2013 on "The Economic Benefits of Providing a Path to Earned Citizenship." It cites a study by Manuel Pastor and Justin Scoggins in which the authors claim that, "They [immigrants] will spend their increased earnings on the purchase of food, clothing, housing, cars, and computers. That spending, in turn, will stimulate demand in the economy for more products and services, which creates jobs and expands the economy."3 The claimed job benefit for the White House-backed S.744 amnesty legislation appears to be designed to overcome the difficulty in generating support for legislation to increase the number of legal workers pursuing U.S. jobs — especially at a time when there is a high rate of unemployment. The Senate legislation (S.744) adopted in July not only would  increase the number of illegal aliens competing for jobs by making them legal workers, it would also increase the intake of both legal immigrants and guest workers coming to the country with visas to take jobs.

The Congressional Budget Office analysis of the Senate-passed S.744 immigration legislation concluded that, "...temporary imbalances in the skills and occupations demanded and supplied in the labor market, as well as other factors, would cause the unemployment rate to be slightly higher for several years than projected under current law."5 The assessment that the legislation's creation of higher unemployment would be only slight and only for several years is optimistic given the pattern of higher foreign-born settlement in the nation's larger MSAs and the already higher level of unemployment in those same MSAs.

Rather than there being an employment benefit from an increased immigrant population, as claimed by the proponents of S.744, the reverse — and adverse impact - would appear to more likely.

2020 Update: How Many Illegal Aliens Live in the United States?

The town where thousands of US-bound migrants came to a standstill https://t.co/zfvRuNXr87 via @CNN @StePozzebon