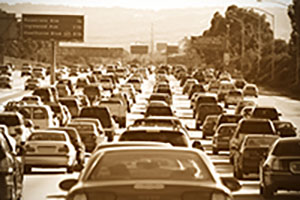 The United States’ rapidly expanding metropolitan areas are already overcrowded and contributing to overpopulation on a national scale. Some may object and point to America’s plentiful and vast open spaces as outlets for a growing population and urban/suburban sprawl. Such unfounded optimism – espoused particularly by numerous lobbies with an institutional and economic interest in high population growth, mass immigration, and intensive development – ignores the serious environmental impact of overpopulation and overdevelopment.  Paving over our farmland and forests to benefit special interests is irresponsible and bad for the environment.

Nations with high consumption levels generally have large ecological footprints, i.e. environmental impact. Add to the equation a large population with a high level of consumption — as is the case with the United States — and the situation becomes unsustainable. Population growth is steadily diluting the U.S. biocapacity, leaving only about 0.47 hectares (about 1.16 acres) of arable land available per person (as of 2016). Meanwhile, due to high levels of consumption, Americans’ per capita ecological footprint remains high: 8.3 GHA (Global Hectares, or 20.5 acres) in 2014 (the most recent data available), in effect remaining where it was in 1961 (when it was 8.1 GHA). (In some years, our per capita footprint was much higher, although the record was 11 GHA in 1973.) In 2014, the U.S. had a per capita deficit of -4.7 GHA (11.6 acres). This means that our per capita footprint (8.3 GHA) exceeded our biocapacity per person (3.6 GHA). Another aspect of this same trend into unsustainable consumption is that the U.S. per capita ecological footprint has increased only slightly — 2.5 percent from 1961 to 2014 — while per capita biocapacity has decreased rapidly — 28 percent. During the same time frame (1961 – 2014), the U.S. population increased by 73.4 percent, and – if current immigration trends and policies continue – is on track to double (compared with the 1961 population) within the 2030s. Our biocapacity deficit has also increased by 57 percent between 1961 and 2014.

Immigration-driven rapid population growth, urban overcrowding, and overdevelopment will only further exacerbate these trends, thereby recklessly damaging our environment. While most environmentalist groups have consistently ignored or otherwise remained silent on the issue of immigration, FAIR will not stray from our mission to preserve the future of America through stabilization of our population and sensible immigration reform.