“Our laws should not reward illegal immigrants to the United States regardless of the political or natural upheavals in their homelands. Otherwise, experience shows that we will encourage further illegal immigration. By now, we should have learned from experience that TPS is misnamed – what we offer as ‘temporary’ protection is most often seen by the aliens residing illegally in the United States as a foot in the door to legal permanent residence. They are happy to accept our offer of humanitarian concern, but they have no intention of departing the United States when TPS status expires.”

Temporary Protected Status (TPS) was enacted in 1990 to apply to non-resident foreigners wishing to avoid returning to their homeland because of civil strife or effects of a natural disaster of “extraordinary and temporary conditions.” The foreigners expected to benefit from this Temporary Protected Status (TPS) were people not seeking permanent U.S. residence, such as students and tourists whose visas were expiring. However, in practice the true beneficiaries of TPS were not temporary visitors, but rather people who had entered the United States illegally.

This was clear from the outset when Congress, in adopting the measure, specified that people from El Salvador should be among the first beneficiaries. The Salvadorans, for the most part, had entered the country illegally.

Not only did TPS spare illegal aliens from deportation, it also provided them a quasi-legal status in the country and gave them work permits so that they could legally work.

As of March 2019, there are currently 417,000 TPS beneficiaries in the U.S. from ten countries: El Salvador, Haiti, Honduras, Nepal, Nicaragua, Somalia, South Sudan, Sudan, Syria, and Yemen. A vast majority of TPS recipients are from Central America – 251,000 from El Salvador and 81,000 from Honduras – and Haiti (56,000). Nepalese also constitute a significant group (15,000) of TPS beneficiaries.

Since its enactment, TPS has become a de facto amnesty as successive presidential administrations have repeatedly renewed TPS status for citizens of multiple nations. They did so in spite of the fact that conditions in their homelands have improved considerably since the original event – an armed conflict or natural disaster – that initially justified protected status. To remedy this problem, the Trump administration attempted to restore the original objective of TPS by terminating the program for El Salvador, Haiti, Honduras, Nepal, Nicaragua, and Sudan. However, federal judges issued injunctions maintaining TPS in place for the six countries in question. These injunctions reflect yet another instance of activist judges attempting to legislate from the bench and obstruct the Trump administration’s efforts to reform our broken immigration system.

Distortions in the TPS Program

Clearly, the test of whether the TPS program would work as intended is whether TPS status has been allowed to lapse when homeland conditions have stabilized, and whether the protected populations returned home. By this standard, TPS has been an absolute failure. Its implementation reveals a pattern of unjustified extensions of TPS designations and demands for amnesty by the protected aliens so that they could stay permanently in the United States.

An example of this distortion of the TPS program may be seen in the continuing extension of that status for Liberians since it was first granted in 1991 as a result of civil war in that country. In July 1999, Attorney General Janet Reno belatedly found that conditions in Liberia no longer justified an extension of TPS. However, President Clinton in effect overruled that finding and again extended temporary protection for Liberians. He did not do so on the basis that the Liberians would face danger or unusual hardship if they had to return home. He justified his decision on the basis that if the United States was to force Liberians to return home, other nations, especially in West Africa, might adopt similar policies toward the Liberian expatriate communities living in their countries. This, the Administration reasoned, might be destabilizing to the current Liberian government.

But, the intent of TPS was to protect individuals, not their governments. The Liberian example was not the first instance of the Clinton Administration heeding the concerns of foreign governments in deciding TPS designation. It had done so earlier when Central American countries asked the United States not deport their nationals who were TPS beneficiaries. They argued that their nations did not have jobs available for the prospective returnees. And, the practice of acceding to pressure from US “immigrant rights” groups and from foreign governments to continue temporary protection against deportation did not end with the Clinton Administration.

In 2007, President Bush found that TPS for Liberians was no longer justified and terminated it. However, at the same time he ordered that the Liberian beneficiaries of the expiring TPS not be deported and instead be granted Deferred Enforcement of Departure (DED), a status that normally is extended only on a case-by-case basis for unusual hardship. That DED designation was set to finally to expire in 2009. But again, before it expired, it was extended for an additional year by President Obama. He did so again in March 2010 for an additional 18 months on the basis of “…compelling foreign policy reasons.” The continuing “temporary” status of the Liberians led to efforts to adopt an amnesty for them to provide permanent legal residence. Rep. Patrick Kennedy (D-R.I.) sponsored an amnesty bill for them, arguing in 1998 that “after seven years of providing them this special protected status we can’t pull the rug out from under them.”

In 2014, Liberians were once again granted TPS due to an Ebola epidemic in West Africa. Subsequently, President Obama extended DED for Liberians through March 2018. President Trump, citing improved conditions in Liberia, stated that another DED extension was unwarranted, but, due to unspecified “foreign policy interests” extended DED through March 2019 – and again through March 2020. Thus, for almost three decades, Liberians have benefited from “temporary” protected status, alternating between TPS and DED.

For nearly as long, TPS status for Central Americans from Nicaragua and Honduras — again mostly illegal aliens — has been extended beyond any rational humanitarian need. Both received that provisional status in January 1999, and have had the status periodically renewed despite the end of emergency conditions in their homelands. Although President Trump terminated TPS status for Nicaraguans and Hondurans (to end in January 2019 and January 2020 respectively), federal judges intervened to prevent him from doing so through injunctions. The same occurred in the cases of nationals from El Salvador, Haiti, Nepal, and the Republic of Sudan.

The Trump administration also decided to extend TPS for citizens of South Sudan, Somalia, Syria, and Yemen. Somalis have been TPS beneficiaries since 1991 and have received 23 extensions or redesignations over almost three decades.

Even in instances where TPS has ended, few recipients came under any pressure to leave the United States and return to their homeland. There is no evidence that the immigration authorities have ever used the information provided by the aliens when they registered for TPS to verify whether former recipients left following the lapse of TPS. Whether the immigration authorities have been under instruction to ignore the illegal residence of former TPS beneficiaries or have simply not seen them as a priority, the results have conveyed the message that there is no hurry in departing — if ever.

The link between TPS status and amnesty for aliens residing illegally in the United States is clear. That link was established in the debate surrounding treatment of natives of El Salvador who were specifically designated for TPS status in the 1990 Immigration Act. These aliens, who for the most part entered the country illegally in the 1980s and were granted temporary protection and work permits as a result of the TPS designation, never went home after political stability was reestablished in their homeland. The fact that they had U.S.-born children, and had been legally working and paying taxes while on TPS/DED, was cited as sufficient reason to grant them legal residence. These arguments led to the adoption of an amnesty for these Central Americans as well as some others.

On November 19, 1997, President Clinton signed into law the Nicaraguan Adjustment and Central American Relief Act (NACARA). NACARA provided permanent residence (“green cards”) to certain Nicaraguans, Cubans, Salvadorans, Guatemalans, nationals of former Soviet Bloc countries and their dependents. A similar amnesty, the Haitian Refugee Immigration Fairness Act (HRIFA), which was enacted in December 2000, applied to Haitians who had been the beneficiaries of an earlier DED designation in 1995.

It should be apparent from the disparity between the intent of our policies and the practical effects that this gap is undermining our immigration laws. Congress needs to correct the balance between compassionate policies and protect the public against problems associated with mass illegal immigration. The American public needs to be reassured that its compassion is being used for victims of political and natural disaster, rather than by foreigners seeking greater economic opportunity.

To end this cycle:

Below is a chronology of the use of TPS grants: 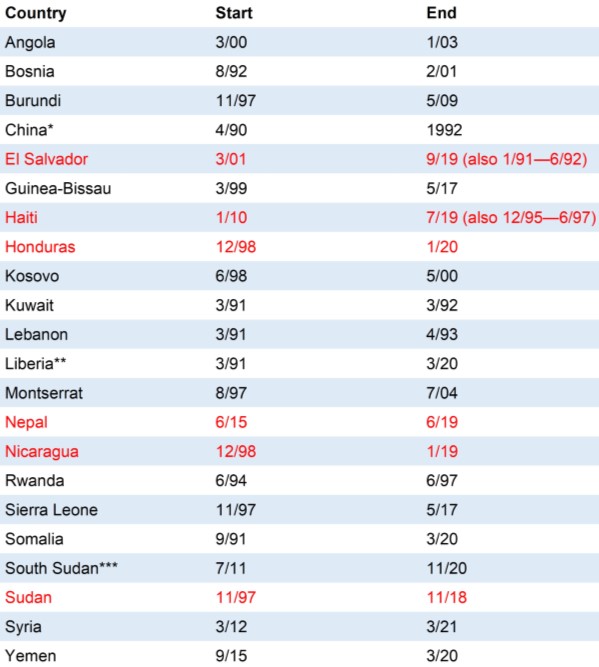 *Executive Order 12711 in April 1990 converted to amnesty by the Chinese Student Protection Act.

**Since 1991 Liberia has alternated between TPS and DED. Most recently, in March 2019, President Trump extended DED for 12 months.

***South Sudan split from Sudan and became an independent nation in July 2011.

Countries in red represent cases of TPS ended by the Trump administration but kept in place by court injunctions.