With the Obama Administration committed to promoting the adoption of an amnesty for the millions of illegal aliens living in the United States in a repetition of the 1986 amnesty, the focus of discussion has largely been on illegal immigration, and legal immigration has largely been ignored. When there is discussion of legal immigration, it most often is focused on calls to increase the number of immigrants. Ethnic advocacy groups bemoan the long wait times for family-sponsored immigrants because the sponsors – mostly earlier immigrants – have become so numerous that the number of immigrant visas exceeds the limits on certain categories. Business interests regularly call for increasing their access to immigrant workers by urging expansion of both guestworker programs and for automatically converting foreign students who graduate from US universities to immigrant status without regard to current limits. But these efforts to expand legal immigration receive little attention outside of media reports generated by the ethnic advocacy community and by the business community.

Largely ignored is the view that legal immigration is already too high. That was the message of the last national commission that studied our immigration policies. The U.S. Commission on Immigration Reform, chaired by Barbara Jordan, the late former Congresswoman (D-TX) and law school professor, recommended in the mid 1990s that legal immigration should be reduced. The Commission asserted with near unanimity that unique provisions of our immigration law that provide for chain migration, i.e., the ability for immigrants to sponsor extended family members, awarding immigrant visas by lottery, and reserving some immigrant visas for unskilled workers make no sense for the nation.

“We disagree with those who would label efforts to control immigration as being inherently anti-immigrant. Rather, it is both a right and a responsibility of a democratic society to manage immigration so that it serves the national interest.” — Barbara Jordan, National Press Club, September, 1994

That was the last that was heard of the Jordan Commission reforms during the Clinton Administration. And, when Immigration legislation was promoted by the Bush Administration, it was not until the very end of the Senate negotiations over the Kennedy-McCain, Cornyn-Kyl, and the Hagel-Martinez compromise approaches to amnesty in 2007 that those recommendations were resuscitated.

In an effort to gain more support from Republicans and some Democrats who were opposed to the amnesty, the Jordan Commission reform proposals for reducing legal immigration were inserted in the proposed legislation. But they did not achieve their objective and, despite passing the Senate, the legislation failed when the House leadership decided there would be no conference committee to iron out differences between the two legislative bodies.

When the Jordan Commission was studying changes in legal immigration policy, immigrant admissions were much lower than the current average of about 1.1 million persons per year. In the early 1990s legal immigration was averaging over 800,000 new green cards issued per year, and in 1995 the admission of new immigrants dropped to about 716,200 persons. The recommendations of the Jordan Commission if implemented would have initially decreased legal entry to 550,000 per year.

Contrary to the popular conception that legal immigration is limited, there is no real cap on new green card issuance. This is because there are categories of immigration that are exempted from or omitted from the immigration limits. The largest of these categories is visas for parents, spouses and children of U.S. citizens as well as adoptions. Another category is refugees and asylees, which is subject to a separate limit decided annually.

Demonstrating the upward trend in immigrant admissions, the following table shows the average annual number of new green cards issued by 5-year period beginning in the 1960s. The first period 1961-65 was prior to the adoption of the 1965 Immigration Act that eliminated the immigration restrictions that had been in place since the early 1920s. The effects of the 1965 opening up of immigration did not begin immediately, but showed some impact during the 1966-1970 period. There have been various amendments to the immigration law since 1965 that have also contributed to the upward trend, in particular legislation enacted in 1990 that increased both family-sponsored and employer-sponsored immigration and established the lottery visa system. 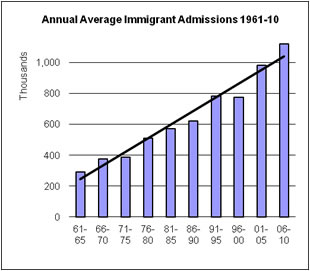 Options for the Future

Increase Admissions — Despite this steeply upward trend in immigrant admissions, a chorus is still urging legislative changes as part of a “comprehensive immigration reform” plan that would further increase legal admissions. It is too early to know the details of the reform legislation that will be introduced in the current Congress and be backed by the Obama Administration, but it is sure to have provisions for increasing immigrant admissions, as did the legislative proposals that failed in 2007. In 2006, Robert Rector of the Heritage Foundation estimated that adoption of the 2006 McCain-Kennedy bill, which was then under consideration, would result in an additional 66 million immigrant admissions over the next 20 years.

The reason for the push for expanded immigration is that as the immigrant population grows now constituting more than one of every eight residents in the country — there are ever more relatives outside the United States clamoring for their immigrant relatives in the United States to sponsor their immigration. Even though immigrant admissions will tend to rise on their own, the limits on family sponsored visas for immigrants who have not become U.S. citizens and per country limits mean that there remains a long waiting list of immigrant visa applicants, and getting to the head of the list may take many years.

Decrease Admissions — The Jordan Commission recommendations are as timely as they were a decade ago, and they are even more needed now than they were then because of the subsequent rise in immigrant admissions. A key issue dealt with by the Commission was what to do about the persons already on the waiting list for an immigrant visa on the basis of an approved petition by a sponsoring family member. The Commission recommended that those persons be notified that the waiting list is abolished and they no longer had any entitlement to a U.S. immigration visa. That recommendation demonstrates the decisive approach needed to bring U.S. immigration policy under control.

FAIR advocates a population-neutral immigration policy. That means a level of immigration that balances migration (residents permanently departing to live abroad). Only in that way can the United States hope to achieve population stability and get off of the treadmill that has steadily increased the U.S. population. While immigration does not account for all of our rapid population increase, it accounts for a very large majority of it, and the share will continue to climb the longer it is unchecked. 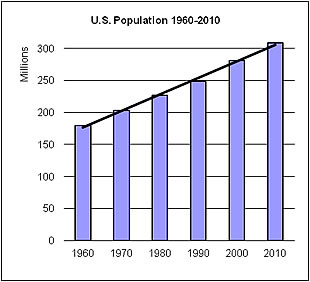 Immigration’s Rise across the Country

Historically, immigrants tended to congregate in “gateway” cities. That pattern meant that states such as New York, New Jersey, California, Texas, Florida and Illinois had a preponderance of new immigrants taking up residence there. That is no longer true either in terms of legal or illegal immigration. The rise in immigrant admissions has been felt across the country. Below is a table and graphs that document the rise in legal immigrant admissions over the past ten years. With the lone exception of New Mexico, all of the states and the District of Columbia reflect the impact of the rising immigrant admissions.

A glimpse at the regional distribution of where newly admitted immigrants say they intend to reside shows that the trend in immigrant admissions is slightly down in the West, due to the fact that the region is dominated by California, and the attraction of California for new immigrants has waned. While all regions have seen the upward trend in immigrant admissions, it is steepest in the South and New England.1 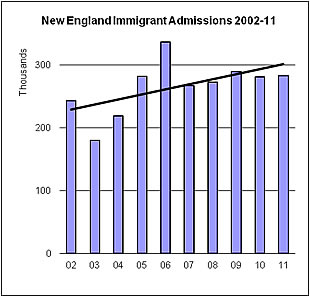 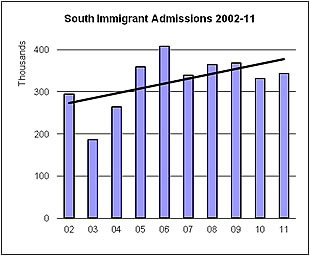 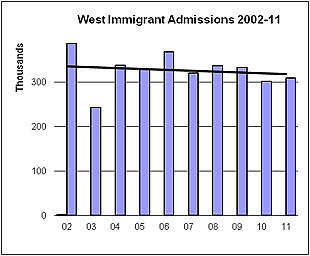 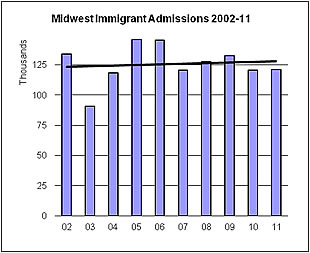 The settlement pattern for the individual states tend to show the same rise in legal immigrant admissions over the past ten years.

The table below shows data from the Yearbook of Immigration Statistic compiled by the Immigration and Naturalization Service until 2002 and since then by the Department of Homeland Security showing intended residence of newly admitted immigrants 2002-2011.
March, 2013