Despite mounting concern about a deteriorating economy and ensuing layoffs, Congress, in response to prodding by business interests, enacted legislation to import more foreign-born workers. While much of the media coverage has focused on the professional guestworker (H1B) visas, the L1-visa has emerged as a growing avenue for employers to bring in foreign specialized workers instead of hiring Americans. Press reports indicate some international companies have been misusing L-l visas to circumvent even the inadequate worker protections in the H-1B visas and displace American workers.

There is growing concern that the L-1B visa, which has no numerical limit, serves as a way to avoid the H-1B cap for some employers. Besides being numerically unrestricted, the L-1 visa has other advantages. Unlike the H-1B visa, the L-1 visa has no labor certification requirement to ensure recipients are paid the prevailing wage and that they are not brought in to replace laid off American workers. 2 The permissibility of spousal employment represents another potential advantage. The accompanying spouses of L-1 recipients are given L-2 visas and it is generally lawful for an L-2 visa holder to accept gainful employment. 3

The original concept for the visa was for a foreign company to be able to bring in employees with specialized knowledge to assist in setting up a branch in the United States. In practice, it has become possible for a U.S.-based company to set up a branch operation in a foreign company and then outsource jobs to an offshore company. Then, the offshore company transfers employees to its U.S. offices to perform the job for the original company (usually for lower pay). Because the original company outsources more work, it can downsize and get rid of American employees.

Though the L-1 visa program is not specifically tailored for the computer or information technology (IT) industries, the majority of L-1 applicants come from these firms. In a 2008 analysis, seven of the top 10 largest L-1 visa users were IT outsourcing firms. Tata Consultancy was first with 4,887; Cognizant Technologies came in second with 3,520 and Satyam, Wipro Technologies, Hindustan Computers, Patni Computer Systems and Kanbay filled out the top 10 spots. Six of the seven also appeared among the top 10 biggest users of H-1B visa the same year. 4

At some large information technology (IT) companies with U.S. offices, use of the L-1 visa now outstrips use of the H-1B visa to bring in temporary foreign workers. 5 In some reported cases, American workers are even made to train their foreign replacements before being laid off. 6

Siemens Technologies laid off Patricia Fluno and 11 colleagues in their Lake Mary, Florida, and office and replaced them with IT workers from Tata Consultancy. 7 The worker to whom Fluno's work was relegated sits at her old desk, answers her old phone number, and earns a third of what she did. This would be a violation of the law if the replacements were an H-1B, but because it is an L-1 visa worker, nothing can be done. As a Siemens spokesperson explained, "They don't work for us. They work for Tata."

Evidence suggests that use of the L1 visa is rising. The latest figures released by the Department of Homeland Security (DHS) show that the number of L1 visas admissions climbed from about 295,000 in 2000 to more than 333,000 in 2009. But they still have not caught up to the H-1B numbers: In 2000, about 355,600 H-1B visas petitions approved, compared with about 339,500 in 2009. Because of the rapidly rising unemployment at that time, a reduction in admission of foreign guestworkers might have been expected but that is not what happened with L-1 workers. 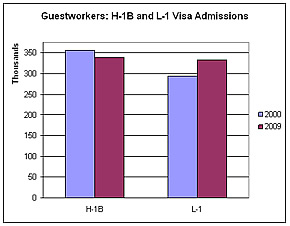 The L-1 visa has been touted to IT companies as the way to get around the limitations in to the H-1B program. One visa and immigration consultant says, "With the jump in IT unemployment, fewer US companies can tap the H-1B program these days since it's conditional to showing that qualified Americans aren't available. [N.B. This in fact is not correct as that provision applies only for immigrant workers, not temporary ones.] At the same time, employers looking to slash costs have discovered that they can use firms that hire L-1s to dump high-paid Americans in favor of cheaper workers from abroad." 8

A major immigration law firm has called the program "a quite useful tool." 9

Congress needs to correct the growing abuse of L visas and add to the program protections for American workers against losing their jobs and wages to temporary foreign workers.

Yes, We Should Help Our Afghan Allies, But Closer to Their Home

FAIR Issue Brief | Thinking Outside the Box:  How to Help Our Afghan Allies Closer to Their Home

DHS secretary complains at House hearing about having to work long hours https://t.co/rAKufuJs2b via @FoxNews

Do Democrats have other another route to reach their immigration goals? Some think so. https://t.co/npWt5Cegli via @voxdotcom