Immigration Now and Then The Tyranny of Change: America in the Progressive Era, John Whiteclay Chambers, 1992.

In the economy of the Gilded Age (rapid industrial expansion), low-skilled workers were highly employable. New mechanical devices and processes were being introduced that did away with the need for workers with special industrial skills and know-how. As the U.S. Industrial Commission pointed out: “The fact that machinery and the division of labor opens a place for the unskilled immigrants makes it possible not only to get the advantages of machinery, but also to get the advantages of cheap labor.” 1 However, modern technology requires skilled workers, not unskilled ones. Yet, in 2001, only 16 percent of legal immigrants were admitted as skilled workers. 2

Before 1900, there may have been some marginal fiscal gain from immigration. Today, the estimated annual net cost of each immigrant, on average, is $2700. Then, immigrants’ stay in the U.S. was often temporary; today’s immigrants are here to stay. The Immigration and Naturalization Service estimates that the rate of return from 1900 to 1904 was over 37 percent 3; in the 1990s, the rate of immigrants’ return to their homelands was a much lower 15 percent. 4

Today Assimilation is Held Back

Ethnic ghettoization and its retardation of assimilation is more serious now than a hundred years ago. At that time, only rarely did a single ethnic group dominate an area of several city blocks, and even then many immigrants moved out of such areas. Now, ethnic enclaves are huge and growing; in the city of Miami, for example, nearly half of the population speaks English poorly or not at all, and 73 percent speak a language other than English at home. 5

Even at the turn of last century, it was known that the era of needed expansion in the U.S. was at an end. At the 1893 meeting of the American Historical Society, Frederick Jackson Turner began his paper on “The Significance of the Frontier in American History” by noting that the Bureau of the Census had just announced that there was no longer a continuous lie of free unsettled land visible on the U.S. map. The American “frontier” had closed…

Today Our Country is No Longer Empty

During those frontier days, we had a vast empty country and states actively recruited immigrants. Now, our country is increasingly congested and communities pass ordinances to limit the growth of their populations. In 1900, the number of people per square mile in the United States was 25.6; in 2002, it was 82 people per square mile—a more than three times greater population density. 6

Today We Have Chain Migration

At the turn of the last century, having relatives in the United States made it logistically easier to immigrate here; it did not, however, guarantee that you would be admitted. At the turn of this century, having near relatives in the United States makes you legally eligible to immigrate and guarantees you eventual admission. In 2001, 64 percent of legal immigrants were admitted simply because they had a relative here. Due to the eligibility of the foreign relatives of immigrants, there is a line of several million aliens waiting and eligible for admission as immigrants to the United States. 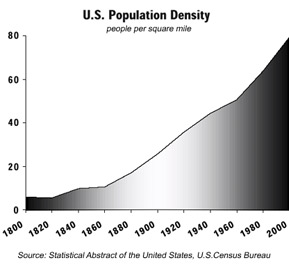 Rep. Flores: ‘The Democratic Party Does Not Care About Immigrants’ or ‘The American People’
https://t.co/jUjKpMQgbo