Chain Migration: When an immigrant to the United States sponsors other family members for admission – such as parents, children and siblings – who can then sponsor other immigrants themselves, and so on… 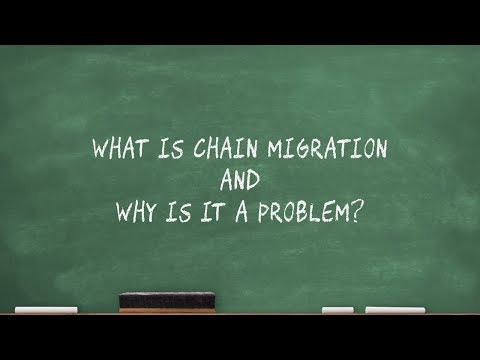 What is Chain Migration?

In 2015, the United States granted 1,051,031 immigrants lawful permanent resident status.1 That’s nearly enough people to populate a major city the size of Dallas, Texas. Why are so many immigrants accepted each year?

Under the United States’ current immigration system, most migrants receive a green card simply because they are the relative of an earlier migrant, not because of what they can contribute to American society. This creates a “chain” of immigrants who can then sponsor other immigrants in the same manner. These, in turn, may sponsor more immigrants, and so on.2

As more and more immigrants are admitted to the United States, the population eligible to sponsor their relatives for green cards increases exponentially. This means that every time one immigrant is admitted, the door is opened to many more.

How Did it Start?

Chain migration became the driving force behind immigration to the United States in 1965, with the passage of the current version of the Immigration and Nationality Act. The 1965 legislation changed the objective of U.S. immigration policy. Rather than admitting immigrants who were likely to assimilate to our culture and succeed in the United States, American immigration policy shifted its focus to an extremely broad concept of “family reunification.” This placed the integrity of immigrant families above the economic, national security, and public safety interests of the American public. As a result, the pool of immigrants eligible to come to the United States became largely self-selecting.

In addition, the 1965 legislation eliminated the firm annual cap on the number of green cards, which had kept immigrant numbers manageable in the years following World War II. As a result, the immigrant share of the U.S. population has nearly tripled (4.7 percent to 13.5 percent) since 1970.3 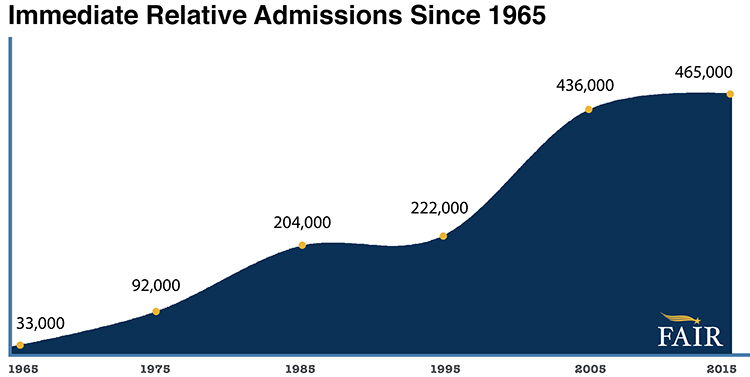 While the annual cap on the admissions of immediate relatives of U.S. citizens was eliminated, most other immigrant categories remain subject to annual limits. As a result, there is a backlog of immigrant visa applications for those categories in countries like India and the Philippines. The wait can often be decades long. There is evidence that these long lines encourage many intending immigrants with marketable skills to seek admission to countries with merit-based immigration systems. Additionally, some argue that the long waits caused by chain migration encourage people to cut the line by immigrating illegally.

President Trump is calling for an end to chain migration in favor of a system that admits new migrants based on merit – what they are able to contribute to American society. He has endorsed the RAISE Act, introduced by Senators Tom Cotton (R-Arkansas) and David Perdue (R-Georgia). If passed, the current, overly-broad “family reunification” policies will be replaced with a system designed to attract immigrants with job skills needed in the U.S. economy, as well as the education and language ability required to succeed. It would also eliminate immigration pathways for extended family members, allowing only the spouses and unmarried minor children of the primary applicant to qualify as derivative beneficiaries.5

Simply put, chain migration doesn’t place the interests of American citizens first. As a result, many well-deserving immigrants with skills and values that could potentially enhance the cultural and economic goals of the United States are passed over in favor of the relatives of previous migrants, no matter what they bring to the table. This is unfair to both American workers and those who have worked hard to form skills that could benefit this nation.

Replacing chain migration with a merit-based system would both lower the overall number of aliens accepted into the country each year, and ensure that those accepted are able to further the United States’ cultural and economic priorities.

1 Department of Homeland Security, Office of Immigration Statistics, Yearbook of Immigration Statistics, 2015, https://www.dhs.gov/sites/default/files/publications/Yearbook_Immigration_Statistics_2015.pdf
2 Four of the five admissions categories for family immigration are reserved for U.S. citizens. This means that immigrants must become naturalized citizens to be able to sponsor relatives in those categories. An immigrant is eligible for naturalization five years after being admitted as a legal permanent immigrant (three years for the spouse of a U.S. citizen).
3 Zong, Batalova, Migration Policy Institute, “Frequently Requested Statistics on Immigrants and Immigration in the United States,” Updated March, 2017, https://www.migrationpolicy.org/article/frequently-requested-statistics-immigrants-and-immigration-united-states
4 Op. cit., Department of Homeland Security
5 Senate Bill 354, Reforming American Immigration for Strong Employment (RAISE) Act, 115th Congress, Introduced February, 2017, https://www.congress.gov/bill/115th-congress/senate-bill/354