The Migrant Protection Protocols (MPP), colloquially known as ‘Remain in Mexico,’was a highly effective Trump-era policy that deterred fraudulent asylum seekers from attempting to reach the U.S. While it was in place, less than 1 percent of those who were returned to Mexico won their asylum cases – compelling evidence of the scope of the abuse of our asylum laws.

Precisely because it was so effective at deterring illegal migration (deterrence being the most humane way to control the border), the open-borders Biden administration wasted no time in suspending it when they came to office in January 2021 and later canceled it altogether. The results were immediately evident: An unprecedented surge of migrants crossing our borders illegally with the expectation that they would be released into the United States pending a hearing on their claims (if they showed up at all), rather than waiting in Mexico until a hearing could be held.

However, the Biden administration’s unilateral decision to cancel MPP ran afoul of the Administrative Procedures Act (the same law that tripped up Trump’s effort to end Deferred 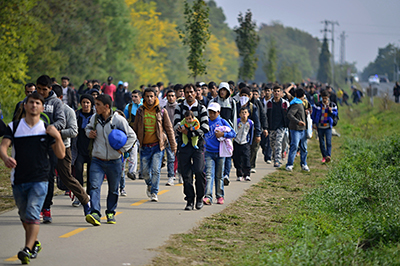 Action for Childhood Arrivals, DACA), and in response to a lawsuit brought by the states of Texas and Missouri, federal courts ordered the administration to reinstate the program. In early December, the Biden administration announced that it had reached an agreement with the Mexican government to restart the program. But don’t get too excited.

Every indication is that the Biden administration will use the program as sparingly as it can possibly get away with. A spokesman from the Department of Homeland Security, which will carry out the policy, even made clear Secretary Alejandro Mayorkas’ disdain for the MPP. They noted that Mayorkas “has repeatedly stated that MPP has endemic flaws, imposed

unjustifiable human costs, pulled resources and personnel away from other priority efforts, and failed to address the root causes of irregular migration.” Consistent with his fall edicts that exempt nearly every illegal alien in the United States from removal, it is a safe bet that the secretary will take steps to ensure that almost no asylum seeker, however specious the claim, will be subject to remaining in Mexico pending a hearing.

Large exceptions to remaining in Mexico are already baked into the reinstatement agreement. Those include elderly migrants, those with physical or mental disabilities and lesbian, gay, bisexual and transgender migrants, who could face discrimination in Mexico.

The administration has also made it clear that it will continue its efforts to terminate MPP, either by appealing the rulings that forced them to reinstate the program, or with a new repeal mandate that adheres to the requirements set forth in the APA.

The Mexican government, for its part, has added new conditions for accepting migrants who are turned back under MPP. For starters, Mexico will only accept Spanish speaking migrants who transited their country on their way to the border. That policy immediately exempts migrants from all non- Spanish-speaking countries. Even many Western Hemisphere migrants will be ineligible for return to Mexico, including many Central Americans who speak their indigenous languages, Creole speaking Haitians, and the growing surge of Portuguese-speaking Brazilian migrants.

Nevertheless, reinstatement of MPP provides President Biden a valuable tool to regain control of the border if he chooses to overrule the open-borders ideologues he has put in charge of immigration policy. With plummeting approval ratings – driven in part by growing public alarm about our lawless borders – with the restoration of MPP the president has an opportunity to do what is right for the country and for his own political fortunes.