On June 15, 2012, then President Barak Obama rolled out a program called Deferred Action for Children of Aliens (DACA). The Obama administration marketed DACA as a way to keep high school valedictorians, gifted students, and other high achieving young people in the United States. However, the demographic data on DACA applicants belies those claims. Most applicants were adults at the time they enrolled in the DACA program.

DACA accepts applications from qualifying illegal aliens who were 31 years old or younger on June 15, 2012. That means 36-year-olds will be able to apply in 2017, provided they were 16 or under when they arrived in the United States.  Clearly, this was not a program aimed at protecting children from deportation. 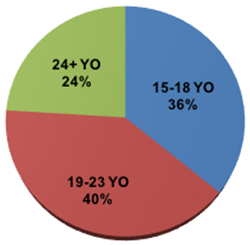 In 2013, the Brookings Institution submitted a Freedom of Information Act (FOIA) requesting statistics on the age of DACA applicants. The results are detailed below, based on 557,412 DACA applications filed from August 15, 2012, to June 30, 2013.

Of all DACA applications submitted during that period, 74.5 percent were approved and 1 percent were denied. The remaining 24.5 percent were still being processed when the FOIA data was obtained. In terms of demographics, 75 percent of applicants were from Mexico, with an additional 17 percent coming from other places in Central and South America.