Support Our Law Enforcement and Safe Neighborhoods Act, known more commonly as Senate Bill (SB) 1070, was signed into law on April 23, 2010 by Governor Jan Brewer, who said that “decades of federal inaction and misguided policy have created a dangerous and unacceptable situation” in Arizona. SB 1070 did spur the federal government to take action. Unfortunately, instead of siding with the citizens of Arizona in their fight against illegal immigration, the Department of Justice chose to sue the state in order to prevent the law from going into effect, arguing that the Executive Branch has the discretion not to enforce immigration law and can prohibit the states from doing so, as well. A federal court has allowed some parts of the law to go into effect while higher courts decide on the constitutionality of other parts of SB 1070. The court battle is far from over.

Polls show broad public support for SB 1070 and opposition to the lawsuits against it. 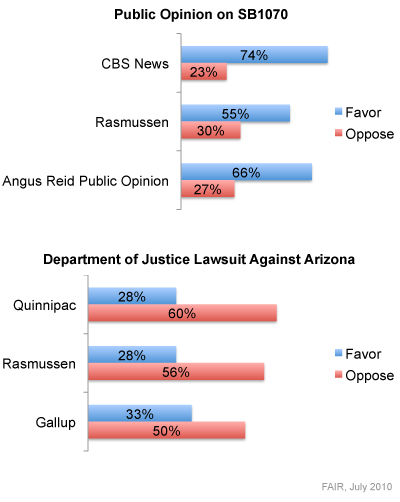 FAIR’s Analysis of the major provisions of SB 1070.

Find out more about SB1070 in FAIR’s Legislative Updates.

The FBI crime index indicates that the crime rate in Arizona has dropped, but it is still near the top of all U.S. states. Arizona was the #1 state from 2000 to 2006 in per capita crimes. In 2008 it had dropped to #4. But still Arizona’s crime rate was 29% higher than the national average.

Arizona Fact Sheet: Learn about the impact that illegal immigration has had on Arizona.

Did you know that illegal immigration costs taxpayers in Arizona $2.6 billion annually?

Read our report The Fiscal Burden of Illegal Immigration on United States Taxpayers to find out more.

Find the current cost of illegal immigration to Arizona taxpayers, and for all 50 states.

Find out more about the impact of immigration on Arizona with our Arizona state data.

Recent Demographic Change in Arizona: Anatomy of Effective Immigration Reform Legislation: Since 2005, when Arizona made E-Verify mandatory for all employers, the state has been at the forefront of cooperative immigration law enforcement. Click here to read how states can make a difference in deterring illegal immigration.