The Department of Homeland Security released its immigration enforcement data for FY 2015 along with self-congratulatory analysis from Secretary Jeh Johnson claiming enormous success in ensuring the security of our borders and the integrity of our immigration laws.

The facts say otherwise. Border returns, interior removals, and the total of both are down dramatically and have been for years. Based on the conservative estimate of 12 million illegal aliens living in the United States, the overall chance of being removed from the United States for violating U.S. immigration laws was a mere 6/10ths of 1 percent.

Note on How Obama "Cooks the Books"

Border returns, also sometimes referred to as apprehensions, and interior removals used to be counted separately before the Obama Administration combined the two to make its enforcement efforts look larger. A border return occurs when an illegal alien is caught sneaking into the country and is promptly sent back by the Border Patrol. An interior removal is when an illegal alien already inside the country has been given a court order to be removed and is deported by Immigration and Customs Enforcement. But now, even though Obama has rolled together the numbers to create an illusion of expanding enforcement, the large declines are clearly evident. 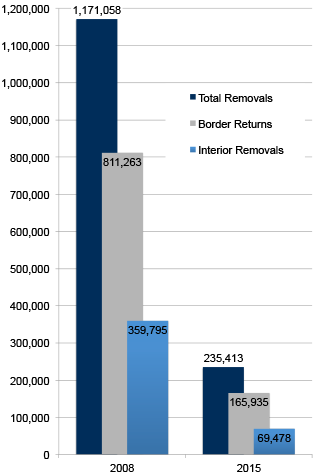 The year before President Obama came to office a total of 359,795 illegal aliens were removed from the interior of the country. By 2015, that number had fallen to 69,478.

Episode 11 of #UnderstandingImmigration will be out tomorrow morning! Be sure to listen. https://t.co/mPG86FZ9Pr

@FAIRImmigration
This block is broken or missing. You may be missing content or you might need to enable the original module.