*This report has been updated to reflect the official figures released by ICE on March 11, 2022*

Recently, the Federation for American Immigration Reform (FAIR) uncovered a report secretly released by U.S. Immigration and Customs Enforcement (ICE) that detailed detention and removal efforts for Fiscal Year (FY) 2021.1 2  As expected, the document revealed that the Biden administration drastically decreased the rate at which immigration lawbreakers are removed from the country. Moreover, they ordered ICE to release a massive number of previously detained illegal aliens into the country, including thousands of criminals.

Several weeks later, the administration finally released their official year-end report, which closely mirrored the figures detailed in the preliminary report uncovered by FAIR.3 Concerningly, this publication excludes a large portion of the crucial data that was traditionally included in previous years.4

Below are some highlights from the reports:

According to the release, which includes preliminary figures, only 59,011 immigration violators were removed from the country during FY 2021. For comparison, the Trump administration still removed 185,884 immigration violators in FY 2020 despite ICE efforts being hampered by the COVID-19 pandemic. 5 Deportations totaled 267,258 in FY 2019, meaning that in just two years ICE removals have decreased by nearly 80 percent.6

While the report does not disclose monthly removal statistics, the first 4 months of FY 2021 occurred during the Trump presidency – an era when ICE removals were significantly higher. Based on trends during the final months of FY 2020 and information from the official year-end report, it can be deduced that approximately 28,000 of the ICE removals in FY 2021 occurred during the Trump administration. 7 This means that the Biden administration has averaged fewer than 3,500 deportations per month, or barely 100 per day. Throughout the duration of the Trump administration, ICE averaged roughly 15,000-20,000 deportations per month. 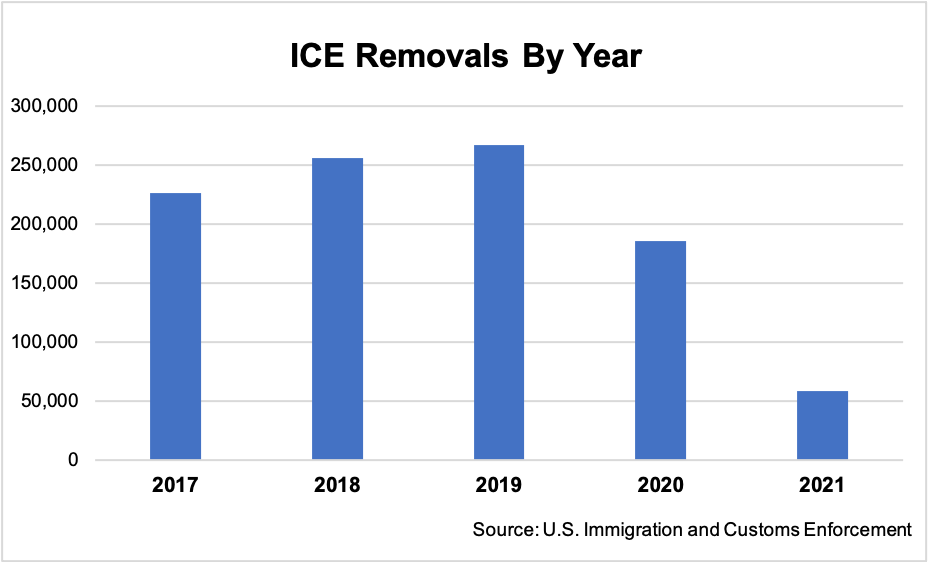 These statistics exclude immigration violators who were released into the country by U.S. Customs and Border Protection (CBP) during FY 2021. FAIR recently released a report estimating that more than 685,000 illegal aliens were either released by CBP or successfully evaded apprehension.8  So, when those CBP figures are combined with ICE interior releases, a total of more than 828,000 illegal aliens were allowed to enter the U.S. undetained in FY 2021. Considering fewer than 60,000 migrants were deported, that means that roughly 768,000 more illegal aliens were released into the country in FY 2021 than were deported.

Finally, ICE only made 74,082 administrative arrests, with most of those occurring during the period when President Trump was in office. This is about 30 percent fewer arrests than were made by ICE in FY 2020. Furthermore, FAIR sources inside of ICE indicate that many of the arrests made during the Biden administration occurred at the Southwest border by ICE agents assigned to assist CBP with managing the ongoing crisis. Theoretically, these should have been counted as CBP apprehensions, not ICE arrests. Because these were included, the arrest figure appears to be artificially inflated. 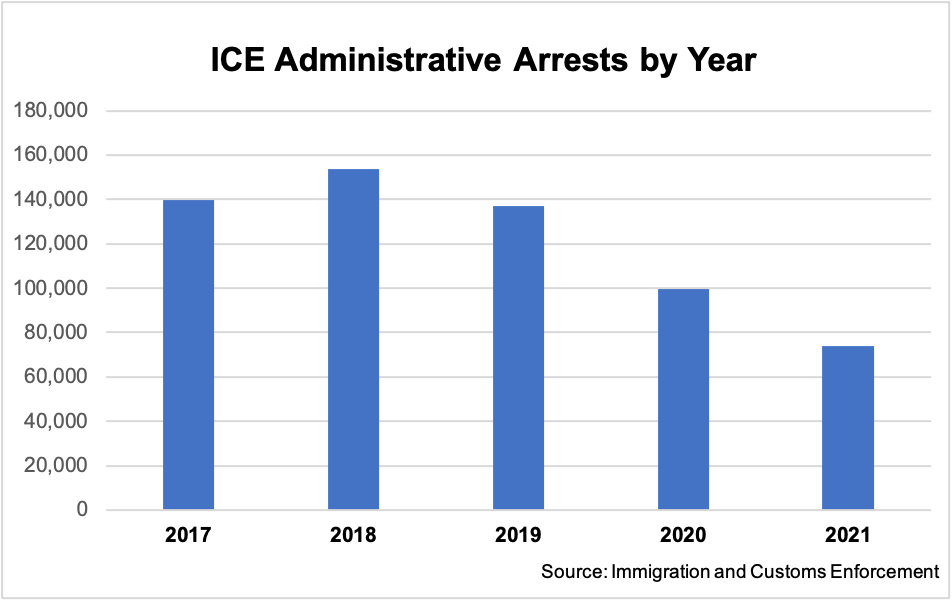 Furthermore, the total number of criminals arrested by ICE were down in most categories, including serious charges/convictions such as:

All these figures were accumulated prior to Department of Homeland Security Secretary Alejandro Mayorkas announcing new measures that prohibit ICE agents from arresting and deporting essentially all immigration violators. Because of this, Americans can expect even fewer ICE apprehensions and deportations in FY 2022.

The net effect of immigration and emigration on a population, expressed as either an increase or a decrease.