Driver’s Licenses for Illegal Aliens: A Bad Policy That Undermines Our Immigration Laws

States have had the authority to establish the identification requirements to obtain a driver’s license for many years, but none explicitly prohibited or permitted illegal aliens from obtaining a state-issued driver’s license. All that changed in 1993 with the passage of a ban in California preventing individuals without Social Security numbers from applying for licenses and the passage of a law in Washington state allowing individuals ineligible for SSNs to apply. Over the last decade, states have sought to clarify the issue, while more than a dozen states have actually enacted laws permitting illegal aliens to get a license, which poses a threat to national security and could promote fraud. 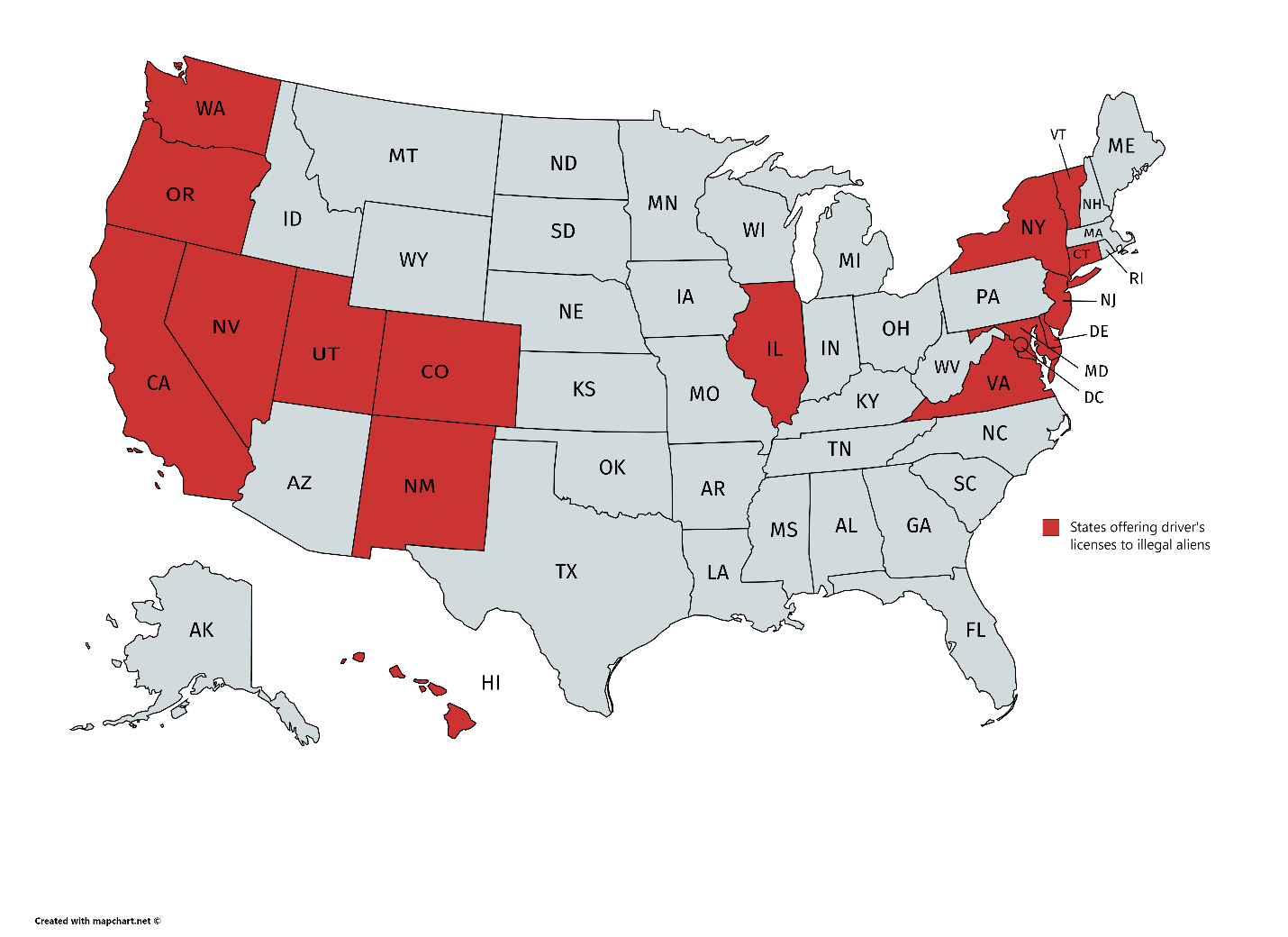 Proponents of granting driving privileges to illegal aliens claim that it will improve road safety, as well as building trust between police and foreign-born populations.. In reality, the policy is a public safety threat which also may facilitate identity, bank, and voter fraud, as well as the employment of illegal aliens. It also allows those breaking the nation’s immigration laws to remain hidden in plain sight, promotes the normalization of illegal aliens, and undermines the rule of law. Further, it is not supported by the American people. An August 2019 Harvard/Harris poll  found that 72 percent of Americans – including 58 percent of Democrats – oppose granting driver’s licenses to illegal aliens.

According to the National Council of State Legislatures (NCSL), 16 states and the District of Columbia allow illegal immigrants to obtain a driver’s license, with the latest in July 2020 when Virginia Governor Ralph Northam (D) signed legislation allowing illegal aliens to obtain driver’s licenses beginning in 2021.

While the majority of states moved to give the benefit to illegal aliens between 2012 and 2015, there has been significant activity in the last year. In 2019, New York, New Jersey, and Oregon all enacted legislation offering driver’s licenses to unauthorized foreign nationals and there were actions to do the same in Florida, Kansas, Minnesota, North Carolina, and Texas. Michigan Governor Gretchen Whitmer (D) voiced support in August 2019 for reversing a ban on illegal migrants obtaining licenses, while the Democrat-controlled Massachusetts state legislature’s Joint Committee on Transportation held a public hearing last September on two identical bills that would take a step toward giving illegal immigrants licenses by creating a separate category of licenses known as “Massachusetts licenses.” Republican Gov. Charlie Baker has vowed to veto any such bill.

In turn, on September 19, 2019, New York’s Republican congressional delegation requested that the U.S. Department of Justice assess the constitutionality of the state’s “Green Light NY” law. Rep. Elise Stefanik (R) correctly pointed out that “this reckless legislation, which a majority of New Yorkers oppose, will hamper efforts to enforce federal immigration laws and has the potential to enable rampant voter fraud in our state.” The Buffalo News reported in early October 2019 that the Trump administration intends to intervene in a lawsuit filed by Erie County Clerk Michael Kearns opposing driver’s licenses for illegals.

The Constitution grants the federal government exclusive power to regulate immigration and part of the Immigration Naturalization Act (INA) - § 275 (8 U.S.C. § 1325) - makes it a crime to enter and remain in the U.S. without inspection and a formal grant of admission by an Immigration Officer. So, while states have the authority and the responsibility for regulating local roadways and issuing driver’s licenses, doing so hampers the federal government’s obligation to enforce immigration law.

Prior to the passage of the first laws granting driver’s licenses to illegal aliens, it was assumed that anyone who did not have authorization to be in the United States could not be granted the privilege of lawfully operating a motor vehicle on American roadways.

Arguments in Favor of Licenses for Illegals: Flawed and Beside the Point

Arguments made by proponents of granting licenses to illegal aliens are tailored to sound pragmatically reasonable, at least at a very superficial level. However, all take illegal migration for granted and either ignore or minimize the larger legal aspect of the question.

One common argument is that the policy will improve road safety, primarily because the foreign nationals must pass a driving test before receiving a license. However, the ability to successfully pass a driving test does not necessarily translate into safe driving, particularly when English is not the first language of many illegal migrants and even more are uninsured.

The policy’s supporters frequently cite a study conducted by Stanford University and published in April 2017 to back their claims. The study examined the effects of a California statute – signed by Governor Jerry Brown in 2013 – which allowed illegal aliens to apply for driver’s licenses as of January 2015. The Stanford researchers found no change in the total number of accidents or the occurrence of fatal accidents, although they also found a 7 – 10 percent decrease in the number of hit-and-runs.

While the advocates of driver’s licenses for illegal aliens tout this as “proof” that their policy is beneficial, there are two significant problems with the study. The Stanford researchers employed a county-by-county methodology to take into account the uneven distribution of the illegal alien population throughout California. The problem is that this approach minimizes the likely possibility of newly-licensed illegal alien drivers – feeling emboldened by the new law – traveling farther, including to other counties. Furthermore, the authors of the study admit that “one important limitation of our study is that we can only consider the short-term effect of AB60 in the first year after implementation.”

The proponents also argue that the policy will help illegal aliens commute to work (the implication being that it is good for the economy). Like the road safety argument, this is also problematic. After all, illegal aliens cannot lawfully work in the U.S., so there is no legitimate reason to make it easier for them to commute to work. In addition, regardless of whatever profit may accrue to the local economy from illegal labor, it is certainly far outweighed by the annual cost of illegal immigration to U.S. taxpayers – $132 billion and quickly rising – and neutralized by the less tangible, but no less real, impact on American workers in the form of either job losses or depressed wages.

The advocates of licenses for illegals also assert that, even if denied driver’s licenses, illegal aliens will continue driving regardless of the law. This, however, is a specious argument that – if taken to its logical conclusion and extended to other crimes – would be tantamount to a plea to dispense with all laws; after all, some individuals will continue committing crimes in spite of them. That, in turn, is the very definition of lawlessness.

Americans overwhelmingly oppose offering driver’s licenses to illegal aliens – and rightly so. There is no reason for states to provide state identification documents to people who have no right to be present in the United States. As in the case of sanctuary jurisdictions, the federal government should withhold funds from states that actively circumvent our immigration laws. In particular, the federal government should seek restrictions on federal transportation funding for states that have laws giving licenses to illegal aliens. Another option that the U.S. government has is to no longer accept – for official purposes – IDs issued by non-compliant states until they reverse course and cease offering licenses to unauthorized migrants. At the state level, American citizens must also put pressure on their elected representatives and make their voices heard on this issue. If the U.S. is to remain a nation of laws, it cannot tolerate the aiding and abetting of illegal migration through such irresponsible policies as the granting of driver’s licenses to illegal aliens.

RT @Lancegooden: If President Biden is going to handle this CRISIS accordingly,

he must acknowledge REALITY and ADMIT he was wrong to null…