The Biden administration so far has been plagued with crisis after crisis. Record inflation, the self-inflicted disaster that was the Afghanistan withdrawal, and a resurgence of COVID-19 cases have all helped tank the president’s approval ratings firmly into negative territory.[1] However, the ongoing immigration crisis, also self-inflicted, is inarguably the longest-running debacle of this administration so far.

Indeed, this crisis effectively started as soon as Biden won the election, signaling that his campaign promises to dismantle immigration enforcement mechanisms and grant amnesty to more than 10 million illegal aliens would likely become a reality. Once he took office, apprehension numbers skyrocketed into unprecedented territory as he began making good on these campaign promises, and they show no signs of returning to historical norms anytime soon. As a result, Fiscal Year 2021 saw the highest apprehension totals on record, with 1.74 million individuals encountered by Border Patrol agents.[2][3]

When monthly apprehension numbers first exceeded 100,000 in February 2021, President Biden falsely claimed that the increase was nothing more than a temporary “seasonal increase” despite it being nowhere near the historical “busy season” for border apprehensions. After being caught in this obvious lie, his administration opted not only to stop making excuses for the crisis; they wholeheartedly embraced it. They boldly added more fuel to the fire by reinstituting “catch-and-release,” ending the Migrant Protection Protocols (and later only half-heartedly and temporarily re-instituting the program when forced to do so by a federal judge) and implementing policies that forbids Immigration and Customs Enforcement (ICE) from deporting most illegal aliens, including dangerous criminals.

Predictably, this inexplicable embrace of policies that harm Americans has made Biden’s first year in office one of the least popular ever, with barely 30 percent of all voters supporting his handling of the border crisis.[4] In a world marked by hyper-partisanship, it’s almost impressive that the Biden administration has managed to do something so poorly that a vast majority of Americans are now united against him on the issue.

Below is a detailed breakdown of the Southwest border crisis and how it compares to the final year of Donald Trump’s presidency.

During FY 2021, U.S. Customs and Border Protection (CBP) encountered 1.74 million illegal aliens, up roughly 380 percent from the 458,088 encountered in FY 2020.[5] During Donald Trump’s final three months as president, apprehensions stayed relatively stable at around 75,000 per month before skyrocketing immediately after Biden took office. However, during the first two months of the Biden presidency, apprehensions increased by more than 120 percent. They continued to rise through July when 213,593 individuals were apprehended. These totals only dropped slightly to 192,001 by the end of the fiscal year in September. 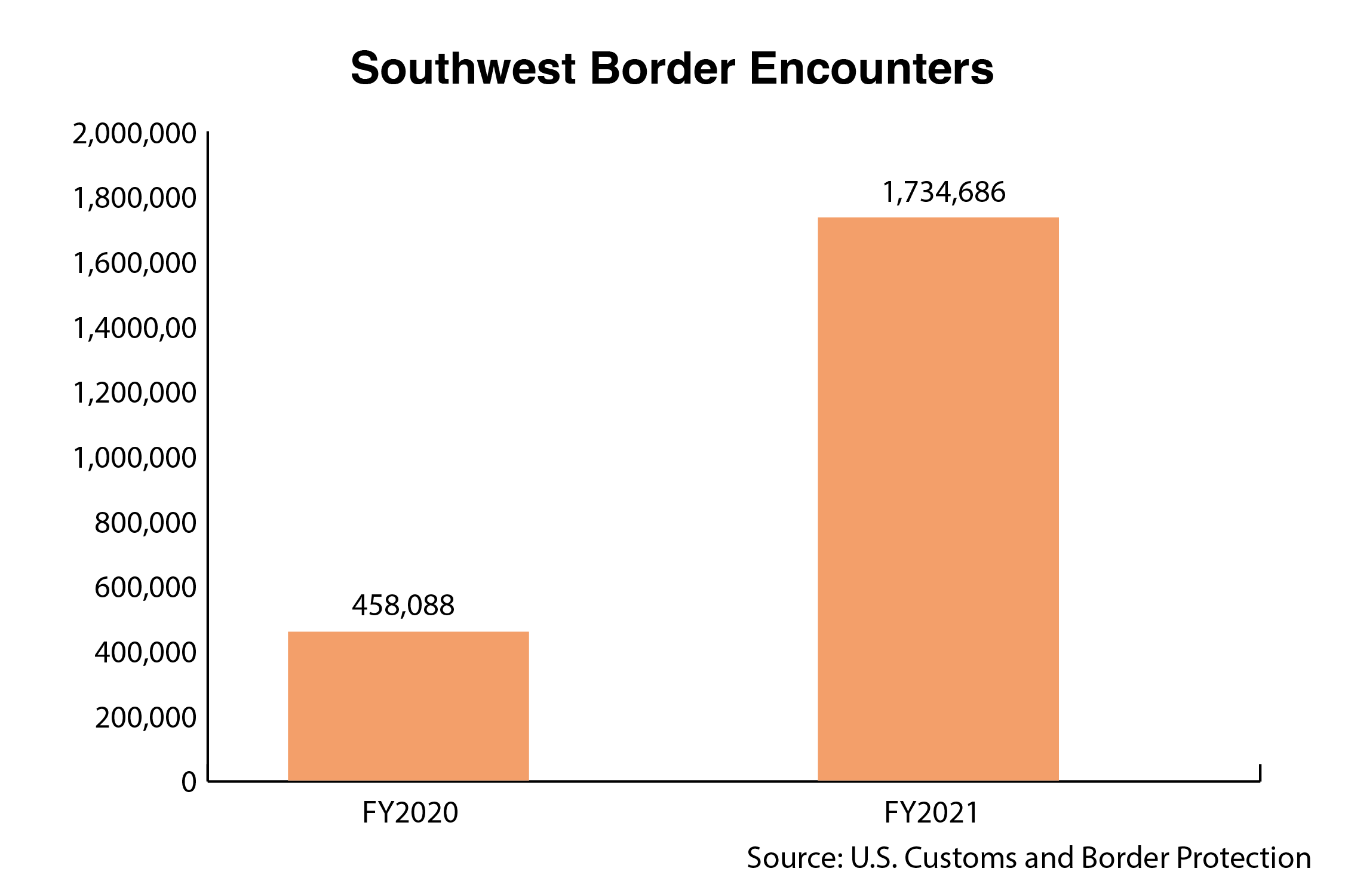 The reason why so many illegal aliens flooded the southern border is the litany of incentives put in place by the Biden administration, combined with the simultaneous ratcheting down of interior and border enforcement. Furthermore, in a 2019 presidential primary debate, then candidate Biden proclaimed “you should come” to prospective migrants. And, indeed, the first migrant surge of his presidency featured migrants wearing Biden/Harris t-shirts and telling reporters that they were only coming to America now because Biden told them to come.[6] Both the words and actions coming from the Biden administration so far have sent a clear message to illegal aliens: “come.”

The Biden administration quickly reinstated the Obama-era catch and release policy after taking office, which means that many illegal aliens are simply issued a “notice to appear” (NTA) in the future before an immigration judge, then released into the country. Unfortunately, with the current backlog of 1.5 million immigration cases, most of these illegal aliens will remain in the country for years before ever having their first hearing. Predictably, at least half of all migrants will fail to show up for their proceedings, instead opting to disappear into the country.[7] 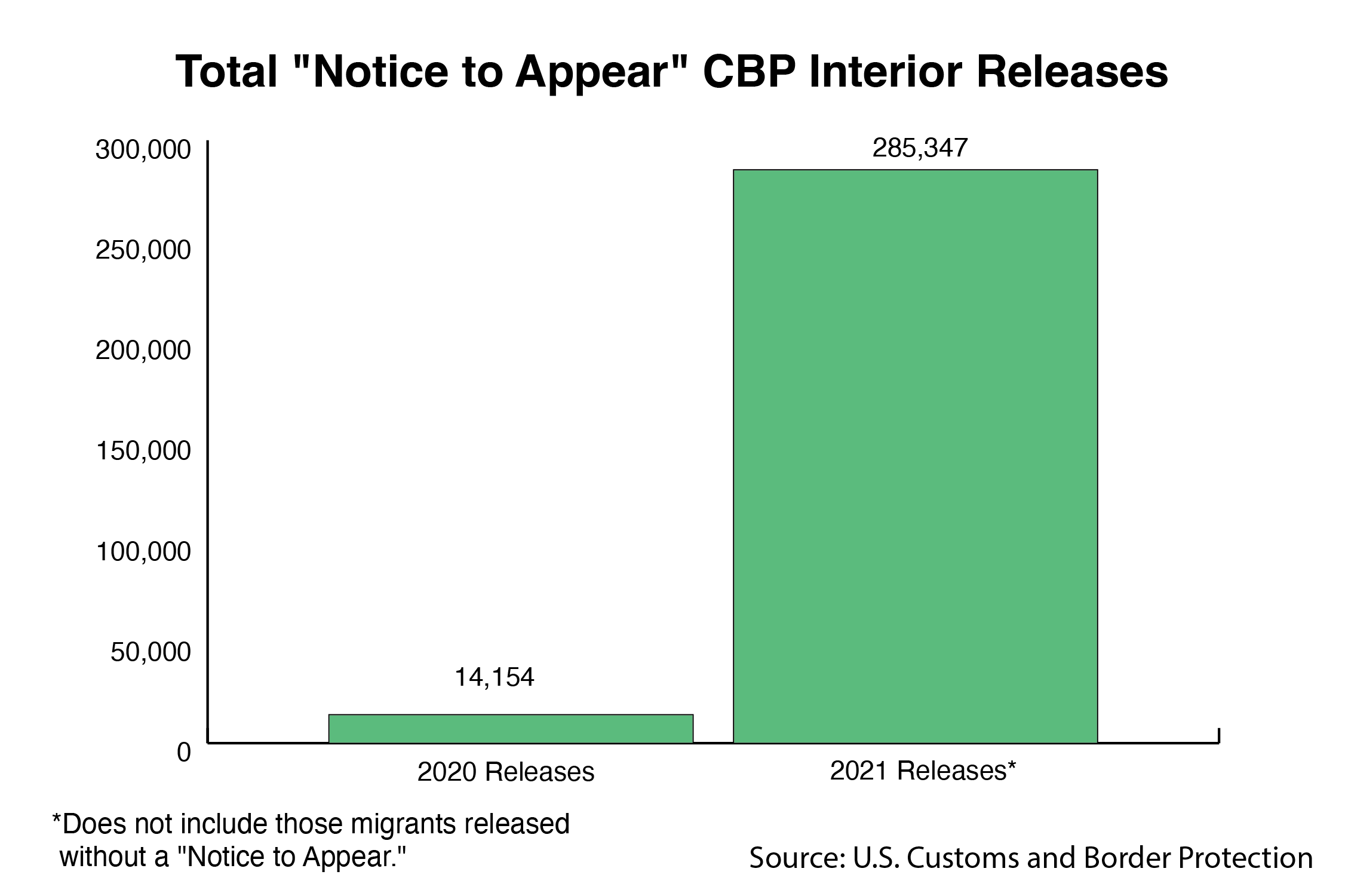 During FY 2021, the Biden administration released more than 285,000 apprehended migrants into the country with an NTA. This is an increase of more than 2,000 percent from 2020, when barely 14,000 migrants were released.

Furthermore, reports revealed that the Biden administration instructed CBP to release tens of thousands of apprehended migrants without an NTA. As a result, immigration officials have no tracking mechanism and instead rely on illegal aliens to voluntarily turn themselves in later to an ICE office for processing and to receive an NTA. However, it has been reported that only 13 percent of the 50,000+ migrants released without an NTA have turned themselves in to ICE.[8] The rest are unaccounted for.

This mass-resettling of illegal aliens has significant consequences. At least 40,000 of the migrants released into the country tested positive for COVID-19, and there are numerous troubling reports of them not respecting CDC-recommended guidelines.[9] In one report, a group of newly released, unmasked migrants were seen “coughing and sneezing” at a restaurant in La Joya, Texas. When approached by local police officers, they claimed that CBP released them because they tested positive for COVID-19. The Biden administration continues to defend its policy of not requiring COVID tests or vaccines for illegal aliens, despite requiring both before lawful migrants and visitors can enter the country. When asked about this hypocrisy, Biden’s press secretary Jen Psaki falsely claimed that these tests are unnecessary because illegal aliens are “not intending to stay here for a lengthy period of time.”[10] Even if this were true (and it’s not), such a stance makes no sense, since even short-term lawful visitors to the United States must produce a negative COVID test and/or provide proof of vaccination before entering the country.[11]

All the figures noted so far do not account for those who managed to successfully evade Border Patrol agents and enter the country’s interior. Former Border Patrol Chief Rodney Scott revealed that more than 400,000 illegal aliens successfully evaded CBP personnel in FY 2021.[13] Thus, approximately 80 percent of all attempted border crossers were apprehended by border agents. In the past, this figure was closer to 70 percent.[14] However, it makes sense that a higher percentage of migrants are being apprehended, as more migrants are voluntarily turning themselves in at the border, knowing that they will most likely be released into the country with no consequences.

Despite the higher rate of individuals turning themselves in at the border, there were still far more “got aways” in FY 2021 than FY 2020, when approximately 105,000 individuals were estimated to have evaded law enforcement officers.[15] 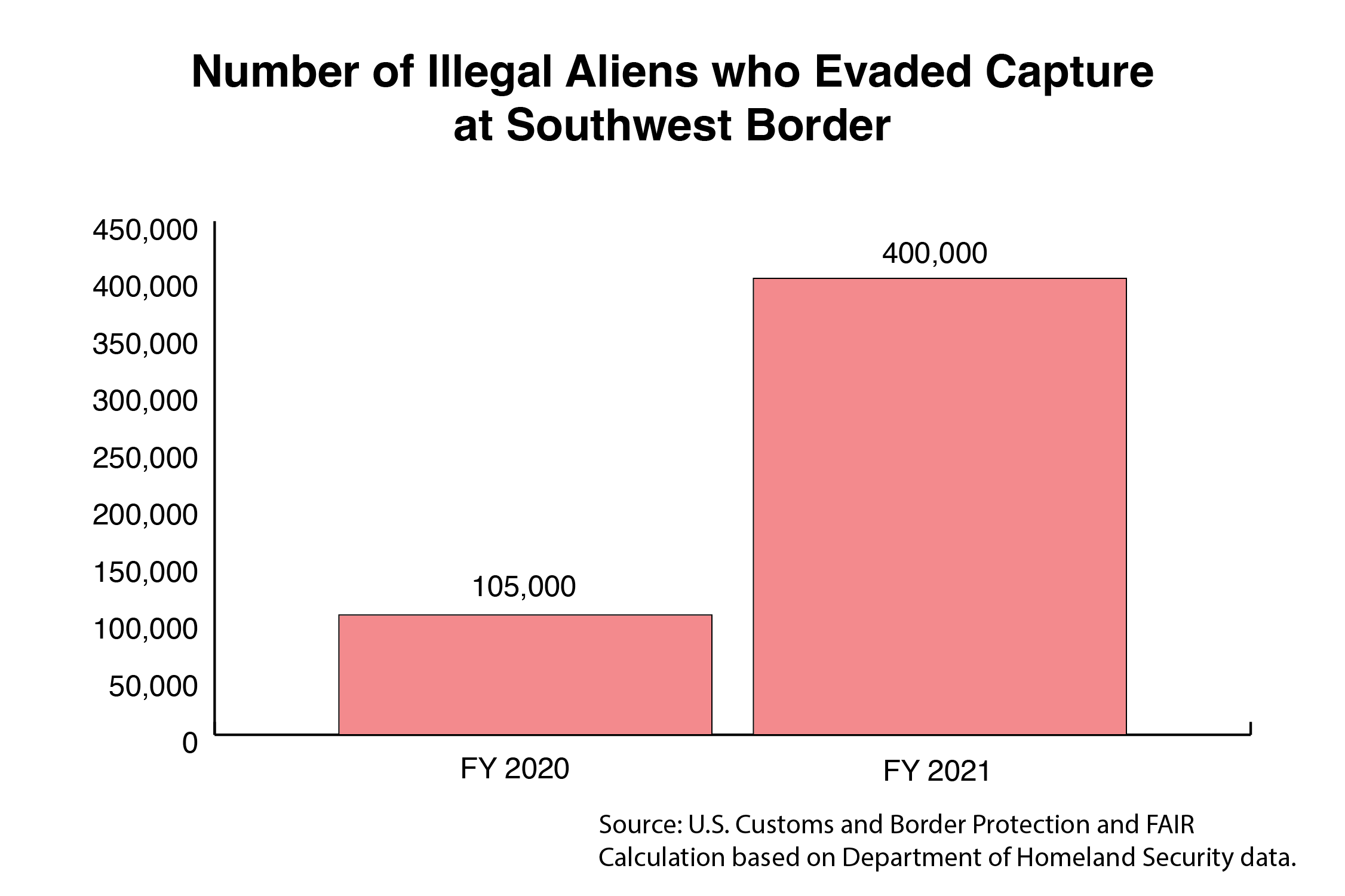 Who are the people who try to evade capture? Alarmingly, they are often criminals and others who do not want to interact with law enforcement. “I would say a lot of them are undesirables,” noted Border Patrol Agent Ron Boren, who heads CBP union local 2554 in southern California. “[These are] the criminal aliens who have been convicted in the United States, the guys convicted of rape, theft, multiple DUIs, and lord knows whatever else.”[16]

Just as those migrants who are released into the country by CBP cost taxpayers billions every year, so do those who enter the country without being caught. Based on the same metrics, these “got aways” from FY 2021 will cost taxpayers approximately $3.6 billion. When this figure is combined with the cost of those migrants who were released into the country by the Biden administration, the Biden Border Crisis will cost American taxpayers a net of $6.6 billion annually. And, considering that Department of Homeland Security (DHS) Secretary Alejandro Mayorkas has implemented ICE apprehension guidelines that forbid prosecuting illegal aliens in almost all circumstances, it’s a safe bet to assume that most of these illegal aliens will remain in the country long-term.[17]

One of the few Biden administration policies offering any public benefit has been its continued use of Title 42 authority to quickly remove illegal border crossers who pose a threat of bringing COVID-19 into the country. However, the Biden administration has continued this program quite reluctantly, and has signaled multiple times that they are strongly considering ending it. 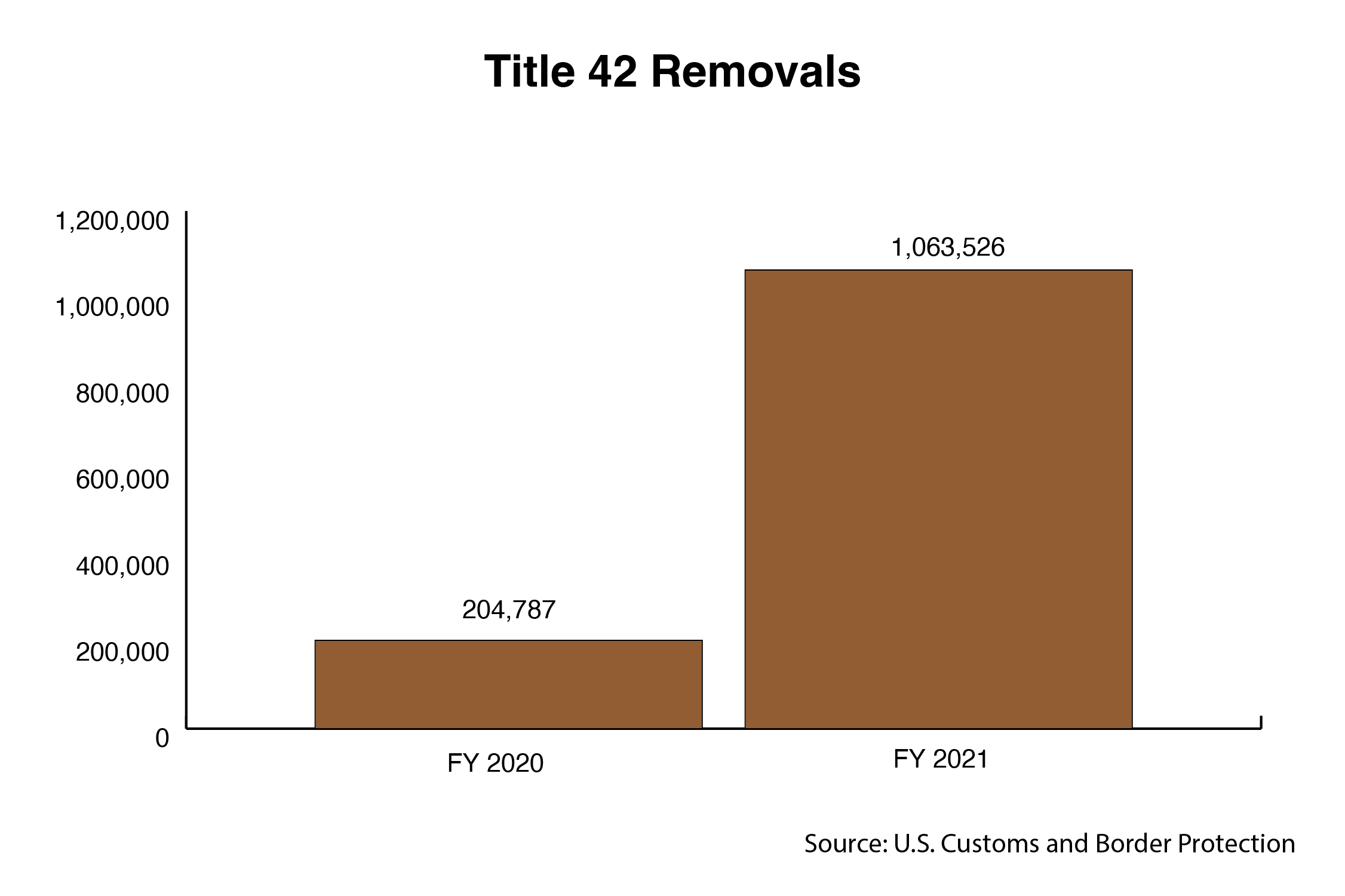 In FY 2020, more than 200,000 migrants were removed via Title 42. In FY 2021, that number jumped to more than 1 million due to the year-long rush of migrants at the southern border. Additionally, there were approximately 52,174 Title 8 “inadmissible” encounters. According to CBP, inadmissible removals include “individuals encountered at ports of entry who are seeking lawful admission into the United States but are determined to be inadmissible…” While most inadmissible migrants are returned to their country of origin, some are allowed in for humanitarian reasons.[18]

If the Biden administration does indeed opt to end the Title 42 program, as mass-immigration advocates are pressuring him to do, that will result in potentially hundreds of thousands of additional illegal aliens being admitted into the country. It would also drastically increase the risk of these migrants bringing COVID-19 into the country, increasing public health risk for American citizens.

It became obvious soon after his election that President Biden was creating the greatest border crisis this country has ever seen, and the FY 2021 data from CBP confirms it. And the most alarming part is that his administration doesn’t seem to care. In fact, they seem quite pleased with the result, and are taking additional steps to attract more illegal immigration into the country.

If President Biden has any respect for the rule of law or cared for the interests of American citizens, he will fire DHS Secretary Alejandro Mayorkas and make enforcing our laws at the border a top priority. However, that certainly doesn’t look likely. As a result, American citizens can safely assume that FY 2022 will simply be a continuation of what we saw in FY 2021 at the border. Illegal aliens will continue to flock into the country, with CBP officers acting as a “welcoming committee” instead of a deterrent.

This means that Americans can expect to lose out on hundreds of thousands of additional employment opportunities, tens of thousands of COVID-positive migrants will be welcomed into the country, and thousands of criminals will enter the country with little fear of being apprehended or deported. President Biden has made it quite clear: he is willing to put American citizens and lawful migrants at risk in order to cater to the wishes of illegal aliens and the mass-migration lobby.

[3] “Encounters” are the new term for “apprehensions,” and include all Title 8 Apprehensions, Title 8 Inadmissibles, and Title 42 Expulsions, according to CBP.

[15] FAIR calculation based on historical CBP estimates regarding the successful encounter rate of migrants attempting to cross the southern border.

[16] Todd Bensman, “Got-Aways’ at the Border” Center for Immigration Studies, May 3, 2021, https://cis.org/Bensman/GotAways-Border.