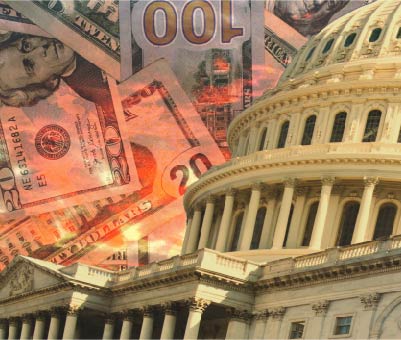 In mid-August, Congress approved the so-called Inflation Reduction Act (a claim that even the Congressional Budget Office disputes) in a straight party-line vote in both chambers. The measure passed in the Senate by a simple majority under a procedure known as Budget Reconciliation, which allows legislation to advance to the floor with just 51 votes, rather than the customary 60 votes needed. The 50-50 tie was broken by Vice President Kamala Harris.

Among the provisions of the massive $740 billion bill is a $45.6 billion provision to beef-up the IRS’s enforcement division with the hiring of 87,000 new agents – over and above the 78,000 already on the job. But tellingly, the Democratic majority in the Senate rejected amendment after amendment aimed at helping the beleaguered 19,000-member Border Patrol cope with an unprecedented surge of illegal immigration.

In July – the latest month for which data are available – Customs and Border Patrol encountered 199,976 illegal border-crossers, the majority of whom were processed and released into the United States. The July apprehension figures represent a 325 percent increase over the average number of July apprehensions under the Trump administration.

Adding in the number of “gotaways” (illegal border-crossers who elude apprehension), for the first 18 months of President Biden’s administration, about 4.9 million people entered the country illegally. That is a figure roughly equal to the entire population of Ireland.

July also saw alarming amounts of lethal narcotics seized at the border. For the month, 2,071 pounds of fentanyl and 12,989 pounds of methamphetamine were seized, with much more getting through because Border Patrol agents are busy processing illegal aliens. Yet, not a single new Border Patrol agent, nor any additional border security fencing was funded in the budget reconciliation measure.

Amendments that were offered in the Senate to improve border security and protect public health and safety, but rejected by the majority party, include:

Funding for an additional 18,000 Border Patrol agents. This amendment, offered by Sen. Rick Scott (R-Fla.) would have conditioned the hiring of 87,000 new tax enforcement personnel on roughly doubling the size of the Border Patrol.

Funding to extend Title 42 until 120 days after the CDC declares an end to the COVID crisis. An amendment offered by Sen. James Lankford (R-Okla.) included $1 million in funding for the Centers for Disease Control and Prevention to continue expelling illegal border-crossers in an effort to protect public health. Democrats unanimously rejected the Lankford amendment and then cynically introduced their own, without a funding mechanism knowing that it violated a Senate rule requiring provisions in reconciliation bills to be strictly budgetary in nature, and would therefore be disallowed by the Senate parliamentarian.

$500 million for additional border security fencing. This amendment, offered by Sen. Dan Sullivan (R-Alaska), would have authorized funding “for necessary expenses relating to the construction or improvement of primary pedestrian fencing and barriers along the southwest border.”

FAIR’s Government Relations department worked with pro-immigration-enforcement members on the Hill to craft amendments that could have helped address the border crisis. While these important amendments failed, they served the important purpose of putting every member of the Senate on record about where he or she stands on border and immigration enforcement.