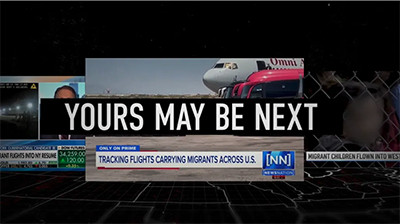 A national ad campaign launched by the Federation for American Immigration Reform (FAIR) in June highlights the Biden administration’s ongoing effort to relocate thousands of illegal aliens to communities all across the United States. For more than a year, the Biden administration has flown planeloads of newly arrived illegal aliens on charter flights, landing them in the dead of night with no warning or coordination with local authorities.

In anticipation of dramatic increases in illegal migration – in response to the Biden administration’s intention to cancel Title 42, the only remaining mechanism to remove illegal border-crossers – increasing the number of secret flights is a cornerstone of the Department of Homeland Security’s (DHS) response to the crisis.

The administration’s stealthy program of moving ever-increasing numbers of migrants away from the border and dispersing them around the country is anything but a fly-by-night operation. It is a well-planned and federally-financed effort to force local communities to accommodate untold numbers of illegal aliens and provide for the needs of these migrants who are flown in under the cover of darkness.

In addition to alerting the public that these federally-funded relocations of illegal aliens are occurring, the ads seek the public’s assistance in identifying where flights are being directed. The first of these secret flights was detected last year in Westchester County, New York, where residents observed unusual late-night flights arriving at a small municipal airport. Other such operations were observed in Jacksonville, Florida, and other locations nationwide, with little or no transparency from the Biden administration about what happens to these migrants once they get off the DHS financed flights. Moreover, contrary to claims by the administration that the passengers are exclusively unaccompanied minors or families with young children, many of those seen getting off the planes appear to be working-age adult men.

Since the Biden administration’s policy hinges on secrecy, the ad encourages citizens to shine a light on what is going on. Early on in DHS’s existence, they sought public input to alert the agency to potential threats using the tagline ‘See something, say something.’ Little did anyone expect that we would have to rely on the public to keep us safe from the secret operations of DHS itself.

The FAIR ads, “Stop the Night Flights,” are appearing online and on media outlets across the country. They can also be viewed on FAIR’s YouTube channel.