Biden’s Sanitized Photo-Op Marks his First Visit to the Border in his 50 Year D.C. Career After 50 years in Washington, D.C., and nearly two years after taking office and promptly triggering the worst border crises in American history, President Biden finally took a trip down to the Southwest border – sort of. The administration announced late last week that the President would be making a very short stop in El Paso on Sunday en-route to Mexico, including visiting a processing center for the thousands of illegal aliens who are apprehended in the sector every week.

However, what actually occurred was little more than a sanitized photo-op designed to gaslight Americans into believing that the border is closed and that everything is under control. Of course, the opposite is true. In fact, before Biden’s visit, El Paso cleared out makeshift homeless camps that were full of recent border crossers. Moreover, the Democratic mayor of El Paso has recently facilitated the busing of illegal aliens out of the city due to overcrowding issues.

Clearly, the situation in El Paso – or anywhere else along the border – is not nearly as rosy as the administration would like Americans to believe. Since he took office, the sector has seen a massive increase in both the nationwide share and total number of annual illegal border crossings. In Fiscal Year (FY) 2022, the El Paso sector accounted for 322,798 of a total 2,378,944 recorded encounters along the Southwest border. Recent trends also show that El Paso is becoming a preferred crossing location for would-be illegal migrants, moving from around 1/8th of the Southwest border apprehension and confirmed “gotaway” totals in previous years to 1/4th of the total now.

Additionally, there has already been more than 2.6 thousand pounds of drugs seized in the sector through only two months of FY 2023, and cartel violence is a constant threat. Among the drug seizures so far in FY 2023, Border Patrol agents have seized enough fentanyl to potentially kill 9,000 Americans. Who knows how much more has been successfully smuggled into the country’s interior, and how many Americans have died as a result. 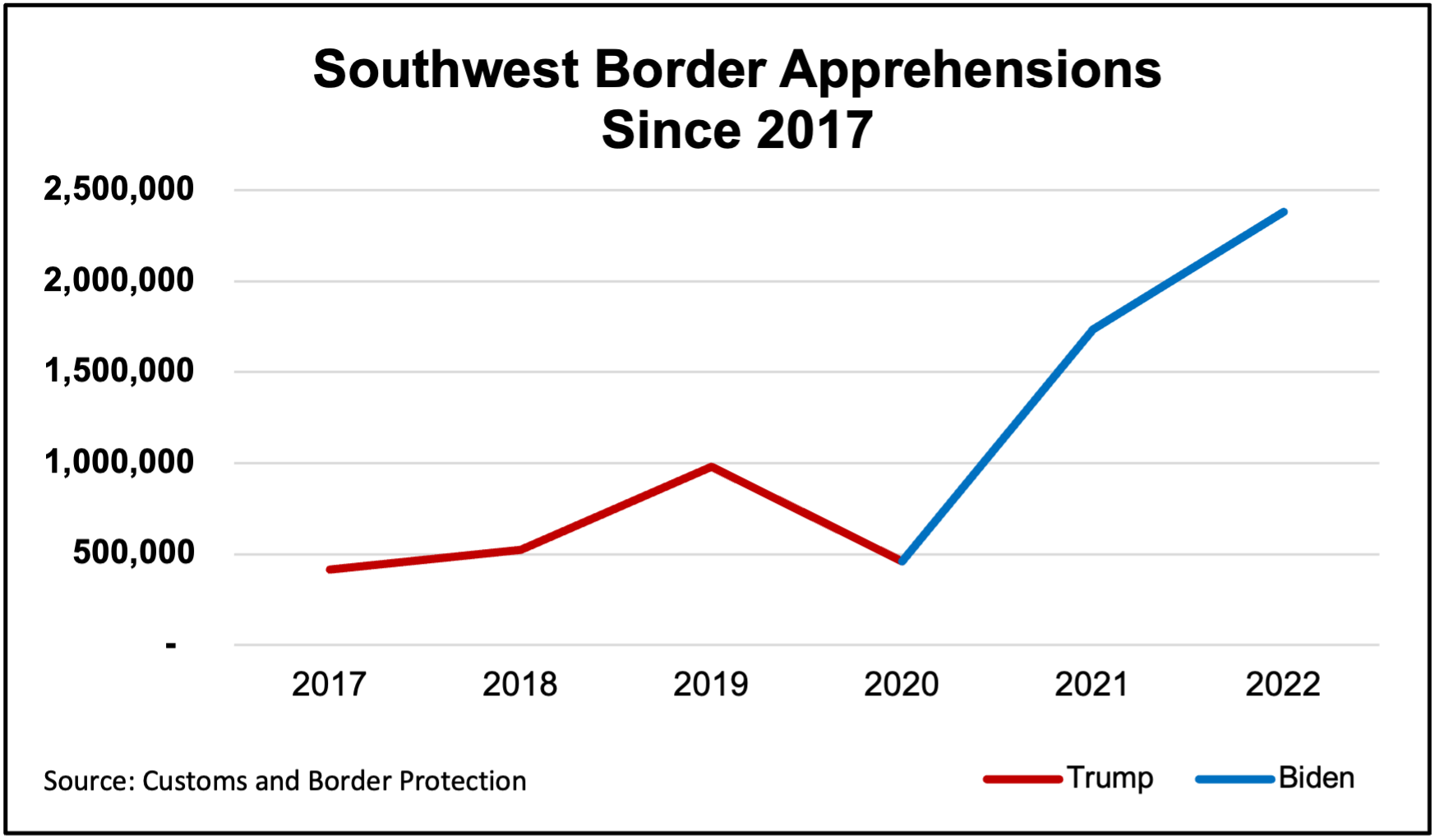 Nationwide, Southwest border apprehensions have skyrocketed into record territory under the Biden administration, proving the lie repeatedly touted by the president and Department of Homeland Secretary Alejandro Mayorkas that they inherited a broken system, and are restoring order to the border.

President Biden’s self-inflicted border crisis has already resulted in record apprehensions in both FY 2021 and 2022, and FY 2023 is on pace to be even worse. The Southwest border is not remotely under operational control, and no amount of lying by the president or Secretary Mayorkas will make it so.

< Previous Article Hundreds of Thousands More Aliens Go Missing Under ‘Alternatives to Detention’ While ICE Deportations Plummet
Next Article > Biden at the Border: Let Migrants Pass Through El Paso (and Beyond)