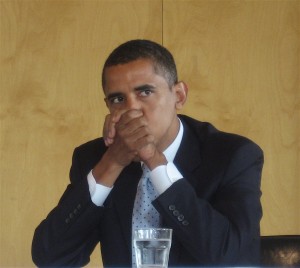 At his first press conference since the election, President Obama told reporters that he wanted to ensure a smooth transition between himself and President-elect Donald Trump and that he intended to give Trump “space” to determine his agenda as well as staff.  Yet, at this very same conference, President Obama said that he would “urge the president-elect and the incoming administration to think long and hard before they are endangering the status of what for all practical purposes are American kids.”Obama’s claim that DACA recipients are “American kids” is factually incorrect on a number of levels. First, DACA recipients are citizens of other nations who are living in the U.S. unlawfully. Second, many DACA recipients are full grown adults. Despite the rhetoric, the actual criteria for DACA eligibility include being under the age of 31 as of June 15, 2012 and claiming to have entered the U.S. before turning 16. Thus, you have DACA recipients who are nearly 35 years old today—hardly the “kids” that open borders advocates claim benefit from the program.Additionally, the recent election shows that the American people favor Trump’s approach to immigration over Obama’s. By electing  someone who championed the American public’s interests in immigration policy over a candidate who pledged to exceed President Obama in the use of executive action to protect illegal aliens, Americans made their views on immigration clear. A pre-election poll by Pulse Opinion Research that found that 54 percent of likely voters believed there has been “too little effort” to enforce our immigration laws and 56 percent supported “causing illegal aliens to return to their home countries by penalizing employers, getting cooperation from local law enforcement, and denying welfare benefits.”