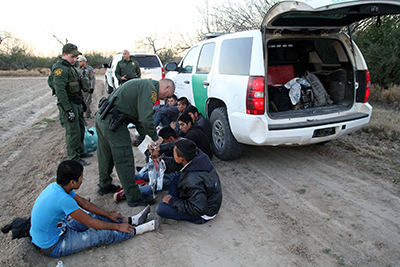 Near the end of his long, rambling State of the Union address, President Joe Biden acknowledged what most everyone who is not serving in his administration has known for a long time: Our border are out of control. Another thing most Americans understand is that the president’s policies are directly responsible for our borders being out of control – a reality that Mr. Biden refuses to acknowledge.

Nevertheless, his admission that we “need to secure the border” is a baby step in the right direction for a president who has both denied that a crisis even exists, and that to the extent that there is a problem at the border, it is due to circumstances beyond his control. President Biden’s remarks to Congress and the nation were light on specifics, while his “strategy” for getting a handle on unchecked illegal immigration continues to rely on Vice President Kamala Harris’ efforts to address the “root causes” of migration, as though the United States has the ability to end crime, corruption, and poverty in the migrant sending countries.

Conspicuously absent from the president’s speech were any concrete actions his administration is prepared to take in order to restore the relative calm that prevailed at the border when he took office in January 2021. Nor should anyone expect that an administration that has dedicated itself to wrecking border and immigration enforcement will take any meaningful steps to bring President Biden’s call to secure the border to fruition. FAIR has a long list of steps that can and must be taken to regain control of the border, should anyone in the White House be interested:

Resume construction of the border wall. Among Mr. Biden’s very first acts as president was to halt construction of secure fencing along the southern border. The border wall, the first sections of which were built under President Bill Clinton, and significantly added to under President Donald Trump, has proven to be enormously effective where it is in place. Construction of many additional miles of the border barrier has already been funded by American taxpayers and is awaiting a green light from Washington.

Fully reinstate the Migrant Protection Protocols (MPP). Ironically, President Biden called for greater cooperation with Mexico to stem the flow of migrants to the U.S. border. Perhaps the president forgot that an effective agreement was in place when he was sworn in, and that he canceled it within hours of taking office. The so-called “Remain in Mexico” policy effectively deterred bogus asylum seekers from attempting to cross the border illegally, knowing that they would be returned to Mexico until an initial ruling could be made on the validity of their claims. Moreover, his administration is defying a federal court order to reinstate the program, while the Departments of Justice and Homeland Security remain committed to ending it permanently.

Fire Secretary Mayorkas and rescind his policy directives. Non-enforcement policies, both at the border and in the interior of the country, have been formulated and carried out by Homeland Security Secretary Alejandro Mayorkas. Mayorkas’ policy directives drastically limit the ability of the two primary immigration enforcement agencies – Customs and Border Protection and Immigration and Customs Enforcement – to do their jobs. President Biden must replace him with a secretary who will uphold his or her constitutional duty to enforce the nation’s immigration laws.

End catch-and-release policies. Rather than expel illegal migrants, or detain them pending a determination of their eligibility to enter the United States, the Biden administration has released hundreds of thousands in the country. Most will never appear for a hearing. The high probability of release (which is about to get higher with the end to COVID-related restrictions on admission) has fueled the border crisis the president claims he wants to end.

These are just a few of the obvious and immediate steps the president could take if he were truly interested in scaling back the crisis at the border. So far, he has taken none. The only logical conclusion is that President Biden’s brief remarks at the State of the Union would placate an American public that has grown increasingly alarmed about the border crisis. It won’t, because the American people understand that the president’s words are not being matched by his actions.