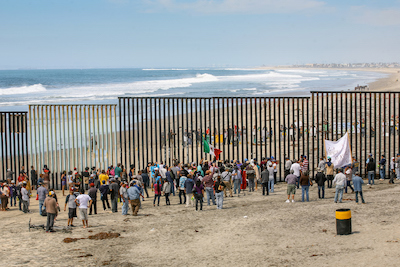 On April 1, the Biden administration announced that it would cancel Title 42 as of May 23. It was not an April Fools’ joke. The administration plans to abandon this public health provision that was invoked in March 2020 at the onset of the COVID pandemic. Under Title 42, Customs and Border Protection (CBP) has been empowered to quickly remove illegal migrants who are apprehended at the border. As recently as February, 55 percent of the nearly 165,000 illegal aliens CBP encountered at the border were turned back under this provision.

The open-borders Biden administration seized on an assessment by the Centers for Disease Control (CDC) that COVID now poses less of a public health threat than it did just a few months ago as a pretense for canceling Title 42. Having taken a wrecking ball to just about every other border and immigration enforcement mechanism during its first 14 months in office, Title 42 is the last remaining policy under which significant numbers of illegal migrants have been prevented from entering the country.

Worse yet, the administration is fully aware of the consequences of ending Title 42 with no other policies in place to deter illegal immigration. Intelligence officials within the Department of Homeland Security (DHS) have cautioned the White House that as many as a million migrants would stream across the border in just the first six weeks after Title 42 is removed. Such numbers would eclipse even last summer’s surge of about 214,000 illegal aliens in a single month.

People working directly for President Biden, including his chief of staff, Ron Klain, and his domestic policy advisor, Susan Rice, have sounded alarm bells. According to The New York Times, “Ms. Rice, Mr. Klain and others were worried that lifting the restriction would invite even more migrants to the southwest border and could be seen as premature if another variant emerged.” Democratic members of Congress, especially those from border states like Arizona and Texas, publicly implored the president not to cancel Title 42 without having any effective policies in place to prevent the border chaos that DHS acknowledges will ensue.

However, instead of maintaining Title 42, or restoring other effective border enforcement policies that were canceled during the president’s first few weeks in office, in an effort to prevent a border crisis of unprecedented magnitude, the administration’s efforts are focused solely on managing the chaos they know is coming. At the direction of DHS Secretary Alejandro Mayorkas, the architect of the administration’s disastrous immigration policies, the agency has assembled a multi-departmental task force charged with processing migrants as quickly as possible and transporting them to their desired destination in the interior of the United States where they are to be released.

To this end, the task force is pulling border agents off the front lines, preparing giant tent cities to temporarily house migrants after they cross the border, requisitioning buses and aircraft from the Federal Bureau of Prisons and the military, redeploying doctors and nurses from veterans’ hospitals around the country, and other measures to cope with the even more massive influx of migrants. Strikingly, President Biden is taking no overt steps to prevent an even bigger crisis at the border (on top of the myriad of other domestic and foreign crises his administration is dealing with), despite explicit warnings by some of his own advisors and members of his own party.

With the clock ticking down to May 23, FAIR is working with lawmakers on Capitol Hill to derail this dangerous move by the Biden administration in the absence of other policy mechanisms to prevent the largest influx of illegal migrants in the nation’s history, and rallying public opposition. Additionally, Arizona, Louisiana and Missouri (there are now 21 states) have filed a lawsuit seeking to enjoin the administration from canceling Title 42. According to the lawsuit, Title 42 is “the only safety valve preventing this Administration’s disastrous border policies from devolving into an unmitigated chaos and catastrophe,” that would cause significant and irreparable harm to states and local communities. FAIR, and our public interest law affiliate, the Immigration Reform Law Institute, are fully supportive of this legal challenge to the president’s move.