Superlatives are thrown around all too casually these days. But it is no exaggeration to label the coming months as the most important moment in the history of U.S. immigration policy. The raging Biden Border Crisis is grabbing the headlines, deservedly so, but a Senate plan to implement a sweeping illegal alien amnesty, by means of backroom parliamentary maneuvers, could have a far more detrimental impact on the nation.

The U.S. Senate wrapped up business for the summer in early August by approving a massive $1.2 trillion spending package, ostensibly to upgrade America’s infrastructure, with bipartisan support. But that spending package was only a precursor to a much larger, $3.5 trillion plan hatched in the Bernie Sanders-led Senate Budget Committee. Although this yet-to-be finalized legislation is also billed as an effort to upgrade infrastructure, it is laden with a dizzying array of Democratic social policy priorities, including plans to grant amnesty to 10 million, or more, illegal aliens.

Virtually none of these social policy goals (especially a mass amnesty amid a raging border crisis) could pass the Senate on their own merits, where it takes the support of 60 members to bring a bill to the floor. Understanding that the Democrats’ control of both houses of Congress is tenuous, Majority Leader Chuck Schumer (D-N.Y.), is attempting to enact amnesty and other unpopular measures by including them in a government funding bill. Under a procedure known as Budget Reconciliation, the Senate can approve measures that have a significant impact on federal revenues with a simple 51-vote majority. In an evenly divided Senate, the tie-breaking vote would be cast by Vice President Kamala Harris. 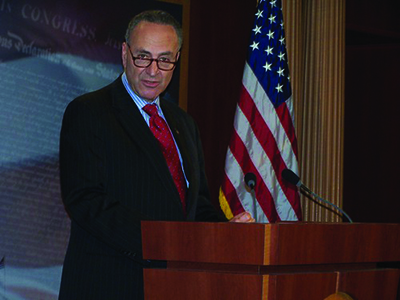 There are some hurdles that Schumer and his caucus must clear before this scenario can play out. The most important – and the best case scenario – is that the Senate Parliamentarian, Elizabeth MacDonough, will reject the Democrats’ argument that amnesty for millions of illegal aliens is a legitimate matter to be taken up in a budget bill. (If anything, amnesty would have a significantly negative impact on the federal budget.)

While FAIR is hoping that Ms. MacDonough will rule (correctly) and bar inclusion of amnesty in a budget reconciliation measure, FAIR is preparing for a legislative battle to prevent it from happening. In July, FAIR commissioned polling in the home states of key Democratic senators who are either up for reelection in swing states in 2022, or who are on record as opposing efforts to busting longstanding Senate rules requiring 60 votes to move legislation forward. It would only require one Democratic senator opposed to including amnesty in the budget measure to block the effort.

In each of these states, Arizona, Georgia, Nevada, New Hampshire, and West Virginia, voters overwhelmingly oppose using a budget measure to enact a massive illegal alien amnesty. The polling, conducted by Zogby Analytics, also found that voters are alarmed by the raging border crisis (for which they hold the Biden administration accountable) and believe that granting amnesty to illegal aliens would only exacerbate an already bad situation.

FAIR is also utilizing social media and paid advertising to educate the American public about both the underhanded tactics that the Senate Democratic leadership is employing, and the devastating impact that their massive amnesty would have on the nation. FAIR activists around the country are also active in reaching out to their senators urging them to oppose leadership’s effort to use budget reconciliation to reward millions of illegal aliens. Moreover, FAIR’s annual Hold Their Feet to the Fire radio row (the largest in our history) will take place just as the Senate is likely to consider the massive spending and amnesty bill, providing timely information to millions of people across the country.

Other factors that play into the outcome include the $3.5 trillion price tag (much of it borrowed money), amid renewed inflation and runaway government deficits, that could scare away moderate Democrats.

It is not an exaggeration to say that the stakes have never been higher. If the parliamentarian permits the abuse of Budget Reconciliation to gain amnesty for illegal aliens, it will require an unprecedented effort on our part to beat it back. Thanks to support from the American public in the past, FAIR has been able to lead the effort to block previous amnesty efforts. We urge all members and supporters to pay close attention to our website, www.fairus.org, in the coming weeks and months and make sure your voices are heard by Congress as loudly as those of illegal aliens.