We Need Your Help!

FAIR is fighting to restore common sense border controls and an immigration policy that works for America and the future of all Americans. Over the past year, America’s immigration and border controls have fallen apart due to ineffective leadership from Washington. We face a true national emergency! There is no time to lose. The American way of life and the future of our natural environment and resource base depends on restoring the proper balance between our needs and the unlimited demands of millions on the move.

But we can’t fight this battle alone. WE NEED YOU TO TAKE ACTION NOW! Can we count on you for a donation or even a monthly contribution? Whether it’s $25, $50, $100 or more, the action you take now will help us continue the fight for an America we can be proud of and the rest of the world will respect.

For Wages to Rise, Immigration Must Fall

There is good news. The national unemployment rate is hovering near 4 percent – the lowest level in nearly two decades. The economy is expanding and businesses are hiring. The complement of the Trump administration cutting taxes, a tightening labor market, and reducing burdensome regulations have contributed to wages and salaries rising 2.8 percent from 2017 - the largest gain since September 2008.

Despite the positive news, there are some sobering realities.

Adjusted for inflation, average hourly earnings actually have remained flat over the last year and for Americans with a high school education or less, wages actually are declining.

Wage growth still lag behind with real hourly wages at levels lower than in 1979, and too many hard-working Americans remain on the sidelines.

While multiple factors affect wage and hiring trends, there is one important economic truth - for wages to rise, immigration levels must fall.

Join FAIR in the Fight to Increase Wages by Decreasing Immigration!

For those worker re-entering the labor force, they already face competition from new graduates, as well as new immigrants and temporary visa holders.

Some employers facing fewer job-seekers have responded by raising wages.

Lowering immigration levels will give businesses the incentive to pay higher wages to attract high-skilled labor or to invest in re-training long-term unemployed Americans.

In turn, workers in low-paying jobs have the incentive to obtain additional training in the hopes of better wages.

Legal immigrants have and will continue to provide value in our economy. But anything in excess is bad and that goes for illegal and legal immigration too.

Analyzing U.S. Census data over the last two decades, Harvard economist George Borjas found mass immigration has flooded the workforce with workers and caused the low-skilled workforce to grow by 25 percent. When openings do not keep pace with the number of workers, those jobs lose their value.

So, it is no surprise that all lower-skilled workers saw their earnings decline between $800 and $1,500 each year. For families trying to make ends meet, that is an unsustainable burden.

Mass immigration has increased competition in high-skilled industries as well.

In 1990, 11 percent of computer scientists were immigrants. By 2001, more than 21 percent of workers were foreign-born.

In 2016, labor force expert Hal Salzman of Rutgers University, told a Senate committee hearing that “all evidence and events suggest [that] the substitution of guest workers for U.S. workers is accelerating.”

Abuses of various visa programs, particularly the H-1B and L visa programs, has led to wage suppression among workers in the tech industry and to the exploitation of foreign workers by employers seeking to cut costs and boost profits.

Recent controversies involving Disney and Southern California Edison placed a needed spotlight on how companies were replacing longtime domestic workers with lower-paid guest workers and forcing the laid-off workers to train their replacements. Those are the ones who have been exposed, but there are more exploitative employers.

For example, in 2001, the number of US computer scientists was 6.1 percent to 10.8 percent lower under the open (with immigrants) than in the closed economy (workforce without immigrant workers).

In his 2017 report examining H1-B visas, Patrick S. Turner, an economics professor at the University of Colorado-Boulder, found workers who are most exposed to increased competition from skilled immigration have lower wages than expected given their age and college major. Overall, Turner estimates wages for STEM workers dropped 4 to 12 percent relative to non-STEM wages due to immigration from 1990–2010.

Health care is widely viewed as one of the fastest-growing sectors of the economy and where the jobs can be found. But immigrants represent a disproportionate share of health professionals.

By 2020, more than 1.3 million additional direct care workers will be needed. Who will get these job then?

Congress and previous administrations have delayed action for years. We cannot afford to wait for them.

You cannot wait to call your local and federal representative to tell them you want a chance for a better life, a fair shot at a decent paycheck.

The message is simple. It is simple enough to be explained in one tweet. 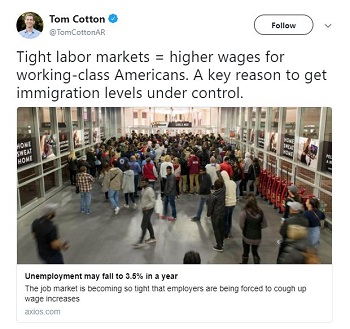